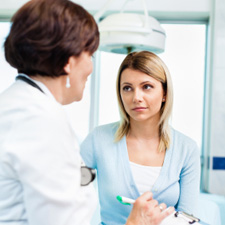 About 50 percent of all Caucasian women and 72 percent of all African American women develop uterine fibroids. These are considered benign tumors that usually cause no symptoms. These growths can range in size from about a quarter of an inch to that of a cantaloupe and are typically discovered during a routine pelvic exam or prenatal ultrasound. In the past, doctors often recommended hysterectomy for large fibroids whether or not they caused any problems, but today’s medical consensus is that no treatment is needed unless the tumors interfere with activities of daily living. When symptoms do occur, they can include pain during sex; pelvic pain, discomfort, or pressure; heavy menstrual bleeding; increased urinary frequency; constipation, gas, or abdominal bloating, and pain in the back or legs. Fibroids can also complicate pregnancy, with greater risks that the baby will be malpositioned, born preterm, or require caesarean delivery.

The treatment you refer to is called non-surgical embolization, a minimally invasive procedure performed by board-certified interventional radiologists. A study from France presented in April 2016 at the annual scientific meeting of the Society of Interventional Radiology found that non-surgical embolization relieved pain and improved sexual function in almost 8 out of 10 women treated. Lead researcher Helene Vernhet-Kovacsik, M.D. reported that when the study began, 189 of the 264 women participating at 25 centers throughout France had abnormally heavy menstrual bleeding and 171 of them had pain associated with pelvic pressure. A year after treatment, nearly 80 percent of the women reported improvement in sexual function as well as less pain and 9 out of 10 rated their overall quality of life as much improved.

Non-surgical embolization requires threading a tube from the artery at the top of the leg to the artery that supplies blood to the uterus. Inert, sand-sized particles of polyvinyl alcohol, a gelatin sponge material or another agent are then delivered through the tube to block the flow of blood to the tiny arteries that supply the fibroid. Without blood, the fibroid shrinks and dies. While considered safe and effective, the procedure carries a small risk of infection and a less-than-one-percent risk of injury to the uterus that could necessitate hysterectomy.

While this treatment isn’t new, it hasn’t been widely used in the United States, possibly because gynecologists who diagnose fibroids don’t perform it and therefore may not recommend it. Its major downside is an unknown effect on fertility. For that reason, it isn’t recommended for women who want to get pregnant.

Non-surgical embolization can be performed on an outpatient basis, although women often spend one night in the hospital. They may be sedated for the procedure or given a local anesthetic. General anesthesia usually isn’t required. After-effects can include cramping and pain that can be treated with medication. Most women can return to their normal activities in a week to 10 days.

If you’re interested in this treatment to relieve pain and sexual problems related to fibroids, seek out an interventional radiologist with experience in performing it. You can identify those in your area via the Society for Interventional Radiology.