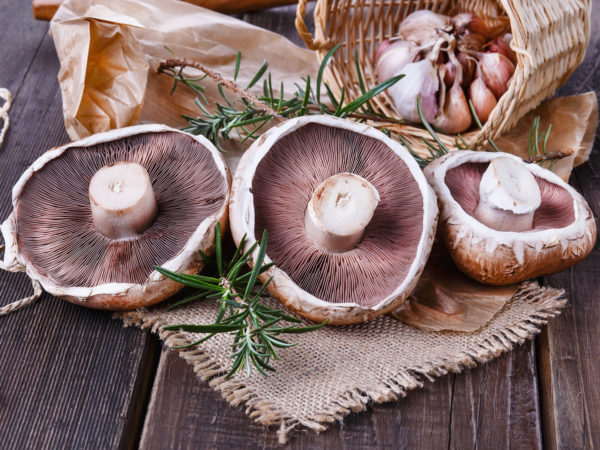 Agaricus blazei, sometimes called Agaricus blazei murrill, is a medicinal mushroom known in Japan as himematsutake; in Brazil, where much of the world’s supply is grown, as cogumelo do sol or medicinel; and in the United States as the almond portobello or Royal Sun Agaricus. This delicious, edible mushroom has a pronounced almond-extract flavor and meaty texture; it also appears to enhance immune system activity.

Although it may sound exotic, Agaricus blazei was first discovered in Florida. Japanese growers are now producing it commercially in Brazil. Researchers in Japan have done most of the scientific studies investigating this mushroom’s medicinal effects. Agaricus blazei contains beta glucans, a group of polysaccharides (complex sugars) that are believed to be the compounds responsible for the mushroom’s immune-boosting effects. In addition, research has shown that Agaricus blazei has anti-tumor and anti-viral activity, as well as moderating effects on blood sugar and cholesterol. It has also been used to treat atherosclerosis, hepatitis, high serum triglycerides, type 2 diabetes and some skin disorders. In Asia, it is widely consumed as an edible mushroom and also in extract form mostly for cancer prevention and treatment.

A 2007 review of the scientific literature on Agaricus blazei concluded that beta glucans presumably contribute to the immunostimulatory activity seen in studies. But the authors wrote that “careful clinical studies comparing the activity of isolated compounds, whole mushroom extracts and epidemiological data are still necessary to determine whether Agaricus blazei Murrill provides real clinical benefits.” They also noted that there is a need for “dose-response studies and isolation as well as chemical identification and quantification of specific compounds responsible” for the potential benefits.

The review described only one human study of Agaricus blazei‘s effects in cancer patients. South Korean researchers found that cervical, ovarian, and endometrial cancer patients who took Agaricus blazei while undergoing chemotherapy suffered fewer side effects than women in the study who did not. Those who took it had better appetite, less hair loss, less general weakness and better emotional stability throughout treatment, the researchers reported.

In addition to Agaricus blazei, I also recommend cancer patients consider three other mushroom species that have anti-cancer and immune-boosting effects: