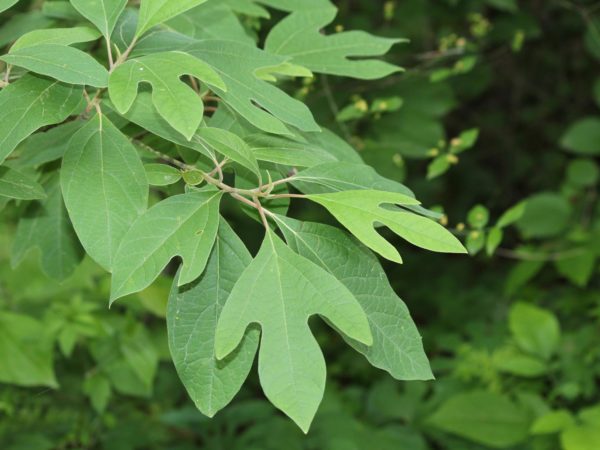 Sassafras (Sassafras albidum) grows throughout the eastern United States and as far west as Texas. Native Americans and early European explorers of North America used the extracts of root and root bark to treat skin diseases, rheumatism, diarrhea and fevers. Over the decades, it has been promoted for treatment of a wide array of conditions, including urinary tract disorders, inflammation, syphilis, bronchitis, high blood pressure, sprains, gout, arthritis, even cancer. However, there is little evidence that sassafras helps treat or cure any of these conditions or affords any health benefits.

Controversy about sassafras has to do the high content of safrole, a compound that accounts for 80 percent of the volatile oil in the root bark and much of its agreeable fragrance and flavor. Safrole causes liver cancer in lab rats when it is injected into them in high doses or with long-term exposure. Based on that finding, the FDA banned food additives containing safrole in 1960 The biggest effect of the ban has been the elimination of whole sassafras root from root beer. Today, sassafras can be used as an ingredient in root beer only if the safrole has been removed through a laboratory extraction process.

We have no evidence that safrole or sassafras cause cancer in humans, although people who chew betel nut, which contains safrole, have an increased incidence of oral, esophageal and liver cancer. Chemically pure safrole is a “watched” substance, because it is the main starting material used to synthesize the illegal drug MDMA (Ecstasy, Molly).

Small amounts of safrole also occur naturally in black pepper, star anise, nutmeg, witch hazel, and basil, all of which are safe in the amounts usually consumed. Dried sassafras leaves are ground into file, a fine powder used in Creole cooking to thicken gumbo when okra is not in season.

A personal note: Years ago, when I lived in northern Virginia, I was intrigued when locals told me about sassafras. Because this shrub or small tree is the first plant to come to life in the spring, they would drink tea made from its root as a tonic to “purify the blood of winter stagnation.” In March when the ground was soft enough to dig but before the bush had developed any leaves, I went after a bit of sassafras root. (It is easy to identify the plant even without leaves, because the stems stay green all winter.) As my shovel hit the root, the air filled with a zingy fragrance that smelled to me like essence of spring. When I boiled a piece of the white root, it produced a deep red tea that tasted so good I began drinking a cup every day. After a few weeks, just as leaves began to appear on the bush, the tea stopped tasting good, and I lost my desire for it. It was as if the plant told me the right time to drink it had passed.

Bottom line: Consuming moderate amounts of safrole in plant products (such as sassafras tea) is not comparable to injecting large amounts of the pure chemical into the abdomens of rats. A search of the medical literature for sassafras tea shows only one report of an adverse effect: excessive sweating in a man who had been drinking it.