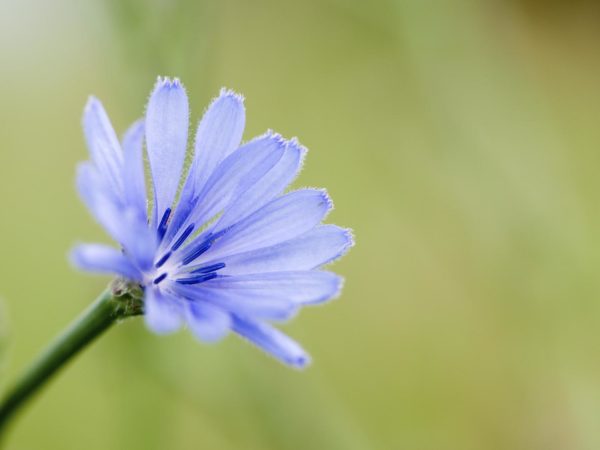 Chicory, more precisely chicory root (Cichorium intybus), grows all over the United States and is cultivated in Mediterranean areas in Europe. Chicory root can be “forced,” meaning mature roots are moved to a warm, dark, moist place to expedite growth and later roast and grind the root to be used as a coffee substitute. (When ground and brewed it looks and tastes something like coffee, but is caffeine-free, less expensive and doesn’t contain the volatile oils.) During World War II, when shipping from coffee-producing countries to the United States was disrupted, New Orleans popularized the use of chicory to produce “coffee.” But it’s not just limited to faux java, Chicory root has been added to certain European beers and ales and recently I’ve seen it incorporated into cocktails to give the libation a hint of bitter earthiness. The leaves of the flowering herb are sometimes sprinkled in salads to add a touch of bitterness, but should not be confused with Belgian endive or radicchio, which are types of salad chicory within the same family.

Medicinal use of chicory root dates back to ancient Egyptians and it has been used to treat everything from pulmonary disease or tuberculosis, to cancer, cough, or wounds. A few preliminary studies suggest that drinking “chicory coffee” might offer some anti-inflammatory benefits for the heart and osteoarthritis. In terms of glucose control, the root contains up to 40% inulin, which is a zero on the glycemic index, so it has a negligible effect on raising blood sugar. This makes it a favorable choice among diabetics and a small study in 2015 show early promise that chicory root could actually help delay the onset of diabetes. However, these nascent findings require additional research.

It’s this presence of inulin (a carbohydrate fiber known as an oligosaccharide) that also makes chicory root a common ingredient in several foods we buy – sometimes called “chicory root fiber.” Inulin is naturally found in bananas, wheat, onions, and garlic, but chicory root’s high concentrations of the prebiotic make it a popular food additive. Food manufacturers extract inulin from the root and add it to products such as yogurt, ice cream, chocolate bars, breakfast bars, salad dressings, and margarine. Because it is water soluble, it imparts a smooth and creamy texture, working well as a replacement for fat – an attribute that gave it the moniker “the stealth fiber.” Inulin travels through the digestive tract without being metabolized until it reaches the colon. Like other high-fiber foods, inulin prevents constipation, is a mild diuretic, helps maintain a healthy balance of “good” bacteria in the colon, and aids in lowering cholesterol. It can also be used as a subtle sweetener in processed foods; its sweetening power is one-tenth that of sucrose.

Ironically, the problem with inulin may be that it doesn’t have the texture or taste of fiber. This can make it deceptively easy to consume too much, bringing on the same kind of digestive problems caused by an excess of any fiber: gas, bloating, nausea, flatulence, stomach cramping, diarrhea, constipation, and digestive “rumbling.” A study from the University of Minnesota published in 2010 found that most healthy people can tolerate up to 10 grams of native inulin (one type of inulin product) and five grams of “sweet” inulin (another version) daily. Flatulence was the most common symptom reported by study participants regardless of the type of inulin they consumed.

Chicory can trigger reactions in people who are allergic to ragweed pollen or sensitive to related plants, including chrysanthemums, marigolds, daisies, and other members of the Asteraceae/Compositae plant family. Because chicory can stimulate the production of bile, consuming it could theoretically be a problem for people with gallstones, but these are unlikely possibilities.