Let me give you a bit of background before I answer your question directly. Humans require trace amounts of iodine, a non-metallic mineral, for proper development and growth. It is present in most soils and is absorbed by plants, which are in turn ingested by humans and animals. The thyroid gland is home to the body’s largest iodine stores, as it requires the mineral for synthesis of the hormones it secretes. That’s why an iodine deficiency can lead to an enlarged thyroid gland (goiter), slowed metabolism, weight gain, and other symptoms of hypothyroidism, such as fatigue, and intolerance of cold. Iodine deficiency can also promote neurological, gastrointestinal, and skin abnormalities. In women who are pregnant or nursing, it can impede fetal and child development. In fact, this prenatal deficiency is the most common cause of preventable brain damage worldwide.

Iodized salt was first sold in the United States in 1924 in an effort to reduce the incidence of goiter, an issue plaguing the country’s “goiter belt” – stretching from the areas surrounding the Great Lakes to the inland regions of the Pacific Northwest. (People living near the coasts get the iodine they need from seafood.) This strategy was very successful. Goiters and other health problems resulting from iodine deficiency are still common in parts of South America, Africa, and central Asia.

We can get iodine naturally by eating saltwater fish and seafood, kelp, and other sea vegetables, as well as vegetables grown in iodine-rich soils. Dairy products can provide it if the animals graze on plants growing in soils containing iodine.

Salt used in commercial food production and fast foods is not iodized. As a result, with so much of our population eating these processed foods rather than whole foods, iodine intake in the United States has declined from about 250 micrograms (mcg) per day to 164 mcg daily. At a minimum, we need 150 mcg, and the recommended amounts for pregnant and lactating women are at least 220 mcg and 290 mcg respectively.

If you are eating a healthy, balanced, varied diet, you’re probably getting enough iodine and don’t need to use iodized salt. Instead, try gourmet salts, which tend to be non-iodized but contain other beneficial trace minerals. Or try sea salt, which contains only small amounts of iodine. I use both unrefined (gray) and refined (white) sea salt instead of commercial salts, which often contain additives I don’t like, such as aluminum compounds to prevent caking. 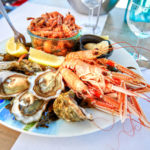 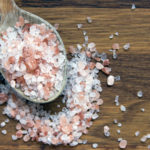