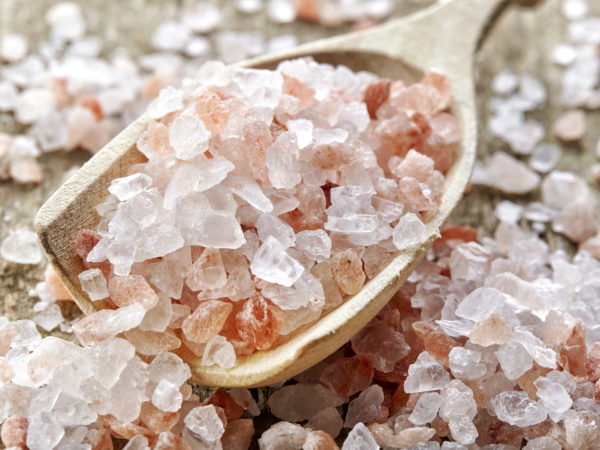 Natural sea salt comes from evaporated seawater and is harvested all over the world. Depending on where they come from, commercial brands of sea salt usually contain a variety of trace minerals that may alter the taste and color of the product. Raw sea salt is often grayish-white, sometimes pink or orange. These salts can be washed and re-evaporated to produce a more costly white product. I myself use both unrefined and refined, gray and white sea salt, which I prefer to commercial salts that often have additives I don’t like, such as aluminum compounds to prevent caking.

The generic sea salt you find in the supermarket may not be additive free, so check the label carefully to find out where it is from and what it contains. The best known all-natural sea salt comes from the coast of Brittany in France where salt farmers have been harvesting salt for centuries. The salt from this area occurs naturally as large-grained crystals that are light gray in color and are known as “sel gris” (French for “gray salt”) or Celtic gray salt. Sel gris can be packaged without any processing. Another prized salt from the same pools is called “fleur de sel” (flowers of salt) because the crystals look like lacy snowflakes. Fleur de sel is white because the salt crystals never touch the clay beds in which seawater concentrates. It is harvested from the surface of the water where it forms when winds are calm and the weather is warm. It is much more expensive than the gray variety.

Famous sea salts also come from Hawaii, Maldon in England, and from the west coast of Sicily. During the past two decades salt connoisseurs among chefs and gourmands have emerged to make sea salt a hot gourmet commodity, so choosing a good additive-free sea salt can be somewhat confusing. Taste a variety to decide which you prefer and buy only small quantities until you find the one you like. And remember that salt is salt – it is 40 percent sodium. We need only 1,500 mg of sodium per day – far less than the average daily intake of five to six grams.