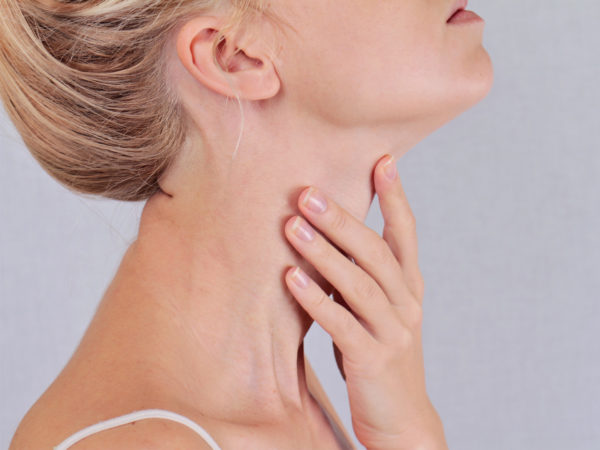 The thyroid is a small, butterfly-shaped gland found near the base of the neck. It produces hormones that regulate vital metabolic processes throughout the body. A deficiency in the production of thyroid hormone, known as hypothyroidism, causes these processes to slow down or stop. Receptors for thyroid hormone are found throughout the body, and disturbance in thyroid functioning can cause problems in almost every system of the body from the heart and GI tract to sleep, mood, even the growth of hair, skin and nails.

What are some hypothyroidism symptoms?

Symptoms of hypothyroidism often develop gradually and can sometimes take years to manifest. Women in their fifties and older are more likely to have hypothyroidism then men; however, teenagers, children and even infants can be affected by this condition. Typical signs that you may have hypothyroidism include increasing fatigue and weakness, often with unintentional weight gain. Skin can become dry, rough and pale, with hair loss and dry, brittle nails. Other frequent problems are sensitivity to cold, muscle or joint aches, constipation, depression, irritability, memory loss, abnormal menstrual cycles with heavy blood flow, and decreased sex drive.

If hypothyroidism is left untreated, symptoms of myxedema can appear. These include very dry skin, and swelling around the lips and nose called non-pitting (firm) edema. More severe symptoms can be life-threatening and include low blood pressure, decreased body temperature, shallow respirations, unresponsiveness and even coma. Fortunately, advanced hypothyroidism such as this is quite rare.

In developing countries, insufficient amounts of iodine in the diet account for most cases of hypothyroidism. Iodine is necessary for the production of the two main thyroid hormones, thyroxine (T-4) and triiodothyronine (T-3). In the U.S. – where salt is iodized, and most Americans get plenty of iodine from table salt – an autoimmune condition known as Hashimoto’s thyroiditis is the most common cause. Hashimoto’s is more common in women and in those with a family history of autoimmune diseases. It involves immune-related inflammation and destruction of the thyroid gland, which reduces proper functioning and production of thyroid hormone. The exact cause and triggers of Hashimoto’s still remains unknown.

Other causes of hypothyroidism include surgical removal of the thyroid (usually for cancer), radiation therapy of the head and neck, or complications of medical therapies for hyperthyroidism. (Patients with overactive thyroids are often treated with radioactive iodine or anti-thyroid medications that reduce thyroid functioning. These effects can be extensive and permanent, and thyroid supplementation is often required flowing these interventions.) Certain medications can worsen or promote hypothyroidism or interfere with thyroid replacement therapy. One such drug is lithium, used for treating psychiatric conditions such as bipolar disorder.

Less common causes of hypothyroidism include congenital (birth) defects (one of the reasons for newborn screening is to check for failure of the pituitary gland to produce enough thyroid stimulating hormone, usually due to a benign pituitary tumor), and pregnancy. Some women can develop hypothyroidism during or immediately following pregnancy, often as a result of developing antibodies against their own thyroid tissue. This is dangerous for both the developing fetus and mother, and can lead to miscarriage, developmental abnormalities, premature delivery and an increased risk of preeclampsia – a potentially dangerous complication in the later stages of pregnancy.

Hypothyroidism diet tips: Some foods, especially cruciferous vegetables (cabbage, kale, Brussels sprouts, broccoli, and cauliflower) contain natural goitrogens, compounds that can cause the thyroid gland to enlarge by interfering with thyroid hormone synthesis. Cooking has been reported to inactivate this effect in Brussels sprouts. Cassava, a starchy root that is the source of tapioca, can also have this effect. Other goitrogens include corn, sweet potatoes, lima beans, and soy. Some practitioners recommend that people with under-active thyroid glands avoid these foods, even though most have not been proved to cause hypothyroidism in humans.

What is the conventional treatment for hypothyroidism?

Most physicians diagnose hypothyroidism by simple blood tests that measure the level of TSH (thyroid stimulating hormone), which is made by the pituitary gland in response to thyroid hormone and the body’s needs, and indicates thyroid status. As levels of thyroid hormones fall, the pituitary releases TSH to stimulate the thyroid to produce more hormone. Clinicians may also measure circulating levels of T-3 and T-4, which are the thyroid hormones themselves. Low levels of T-4 and high levels of TSH reveal an underactive thyroid. Other variants of hypothyroidism can exist. Patients can have no symptoms and normal serum thyroid hormone levels, but elevated TSH. Others can have symptoms, but normal TSH and T-4 levels. Patients with either of these variants may benefit from supplementation. In addition, someone with a temporary illness might have a completely normal thyroid but high TSH, a condition called “sick euthyroid” which usually resolves without any intervention.

The purpose of treating hypothyroidism is to maintain normal metabolism by correcting a deficient output of thyroid hormone. Once replacement therapy begins, the thyroid will stop producing hormones all together, and replacement must be continued for life. Most mainstream physicians prescribe the drug Synthroid, also known as levothyroxine, a synthetic analog of thyroxine (T-4) and monitor how much to give based on symptoms and levels of TSH. Physicians will generally check TSH levels after a couple of months of being on the medication and adjust it accordingly. They will often used a more cautious course in patients who have cardiovascular disease. This allows the heart time to adjust to an artificially increased metabolism. Side effects of taking too much thyroid hormone include shakiness, palpitations, insomnia and changes in appetite.

What therapies does Dr. Weil recommend for hypothyroidism?