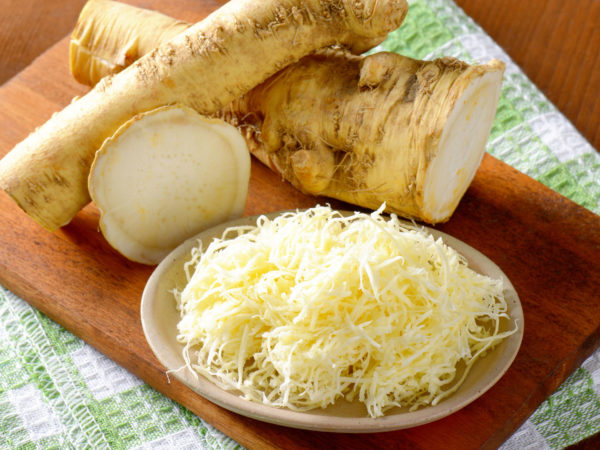 Horseradish (Armoracia rusticana) is a tall perennial plant that has been prized for its medicinal and culinary qualities for over 3,000 years. Part of the Brassicaceae family, horseradish is related to mustard and wasabi – not surprising, considering its spicy, pungent taste and ability to open the sinus passages. Native to southeastern Europe and western Asia, horseradish is now used around the world for the flavor and medicinal properties contained in its root.

The “horse” in its name is likely due to the large size and coarseness of the plant; “radish” derives from the Latin word for root. Used by early Greeks as both an analgesic and aphrodisiac, horseradish’s popularity spread during the Renaissance from Central Europe to Scandinavia and England. It came to North America with the first waves of European settlers, and was cultivated in the colonies. Today, horseradish is grown in the American Midwest and northern California.

When intact, the horseradish root has little aroma, but when cut or grated, it releases enzymes that produce an irritant that can affect mucous membranes, sinuses and tear ducts of the eyes.

One study has found that the health benefits of horseradish may be comparable to pharmaceutical antibiotics for treating acute cases of sinusitis, bronchitis, and urinary tract infections in children. Researchers found that children who were given an herbal drug preparation of horseradish had fewer complaints and side effects compared to those taking antibiotics.

Pregnant women should avoid excessive oral doses of horseradish as it may act as an abortifacient.

For culinary use, the term horseradish usually refers to a prepared mixture of the grated root with vinegar (once exposed to air or heat, horseradish will quickly turn a dark color, lose its taste and become bitter; vinegar helps to preserve its color, taste and effect). While the leaves of the horseradish plant are edible, they are not usually eaten. Prepared horseradish is a light, creamy color, and will stay fresh in the refrigerator for months – when it turns darker, it should be replaced.

Prepared horseradish can be used as a condiment on sandwiches and to accompany roast meats. It is also commonly added to cocktail sauce and Bloody Mary cocktails for an added kick.

Dr. Weil’s take:
A tablespoon of prepared horseradish has no fat and only six calories. Prepared horseradish is a great alternative to butter and salt as a vegetable topper in many dishes. Try mashing a little fresh horseradish with ripe avocado, salt and pepper for a spicy chip dip. When cooking with horseradish, I like to add it toward the end of cooking to preserve its spicy bite – prolonged cooking can dull the flavor. Horseradish also pairs well with some fruits, like apples and pears, especially when baked into fruit-based recipes.

More information and some horseradish recipes: