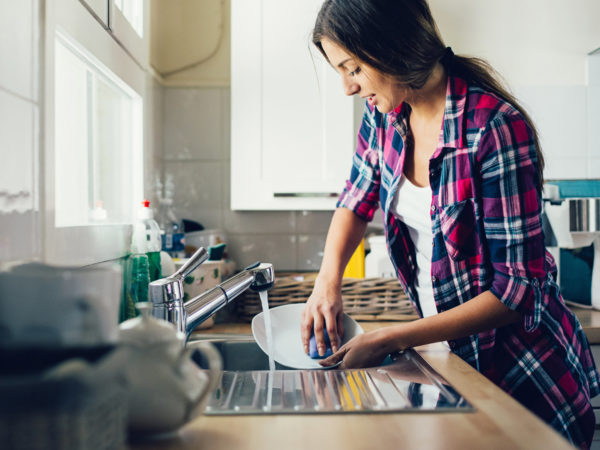 Women who engage in routine work around the house – everything from folding laundry to washing dishes – are likely to live longer than their more sedentary peers. This finding comes from a University at Buffalo study of more than 6,000 white, African-American and Hispanic women ages 63 to 99. The benefit of the physical activity involved in performing their daily chores, as tracked by motion-sensing accelerometers the woman wore, added up to a 12 percent lower risk of death over the three-year study period. Study participants who also engaged in moderate to vigorous exercise, such as brisk walking or biking at a leisurely pace, had a 39 percent lower mortality rate compared to sedentary women in the study. The investigation is believed to be the first to demonstrate that “doing something is better than nothing” even if you don’t meet recommended levels of physical activity, noted study leader Michael LaMonte, Ph.D., an associate professor of epidemiology. The benefits seen during the study were similar regardless of the women’s age, their racial/ethnic background and whether or not they were obese.

My take? I certainly agree that “something is better than nothing” when it comes to engaging in physical activity, but the University at Buffalo study’s finding that the women who exercised in addition to their housework had almost a 40 percent lower mortality rate is especially noteworthy. Regular, moderate exercise helps maintain the health of blood vessels, strengthens the heart muscle itself, and can help reduce heart disease risk factors including high cholesterol, high blood pressure, insulin resistance, and stress. I recommend that regardless of age, women – and men – who are physically able to engage in exercise should aim for 30 minutes a day of moderate aerobic activity on most days of the week.