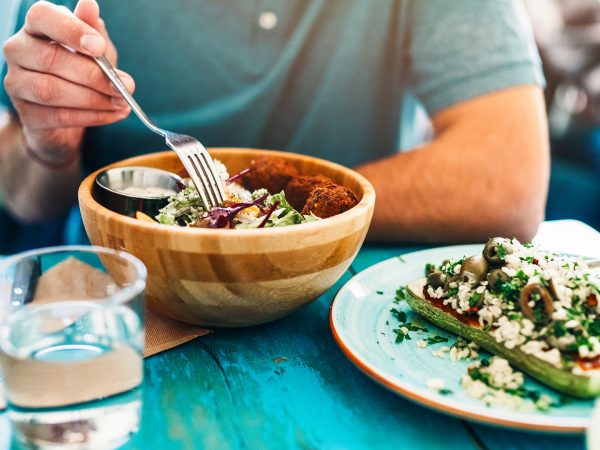 You’re referring to study that investigated whether a fruit- and vegetable-rich diet followed by men with early stage prostate cancer would prevent their disease from advancing. It was the first randomized clinical trial to test the notion that a dietary change might influence progression.

Unfortunately, that didn’t happen, although the results don’t provide justification for affected men to eat anything they want. “The overall health benefits of a diet that’s relatively low in fat and rich in fruits, vegetables and healthy grains are well established,” said study co-author, James Mohler, M.D., professor of oncology at Roswell Park Comprehensive Cancer Center.

A total of 478 men between the ages of 50 and 80 at 91 sites in the U.S. participated in the Men’s Eating and Living (MEAL) study. All had been diagnosed with early-stage prostate cancer and were enrolled in an active surveillance program that enabled them to defer treatment until their disease advanced. Half the participants were assigned to eat seven or more daily servings of fruits and vegetables, including tomatoes and at least two servings of cruciferous vegetables, such as cauliflower, cabbage, or broccoli. These men were telephoned frequently by counselors to help them stick to the diet. The other participants were assigned to a control group and given printed material encouraging a vegetable-rich diet but received no follow up from counselors. All the men were followed for two years.

Although the diet didn’t change the course of the disease, study leader, J. Kellogg Parsons, M.D. of the University of California San Diego School of Medicine, said that the anticipated changes “may keep the body stronger and healthier, which may help patients tolerate cancer treatments.” However, the authors concluded that the results “fail to support prevailing assertions in evidence-based clinical guidelines and the popular media that diets high in micronutrient-rich vegetables improve cancer-specific outcomes among prostate cancer survivors.”

The study protocol was based on several prostate cancer clinical guidelines suggesting that cancer progression and death are lower among patients who follow a vegetable-enriched diet. In addition, the researchers said that cancer patients often ask whether a change in diet would influence their diagnosis and treatment.

Dr. Parsons noted that other scientific studies have identified a strong role for changing diet to improve outcomes in diabetes and cardiovascular disease but not in cancer. While the MEAL study showed no impact on prostate cancer progression, it did demonstrate that behavioral modification can lead patients to make healthier food choices.

Prostate cancer is often slow growing. Many patients live much longer than five years after diagnosis. In fact, almost 90 percent of men with prostate cancer live at least five years, and 63 percent survive more than 10 years. If the cancer is detected before it has spread to other organs, the five-year relative survival rate is close to 100 percent.