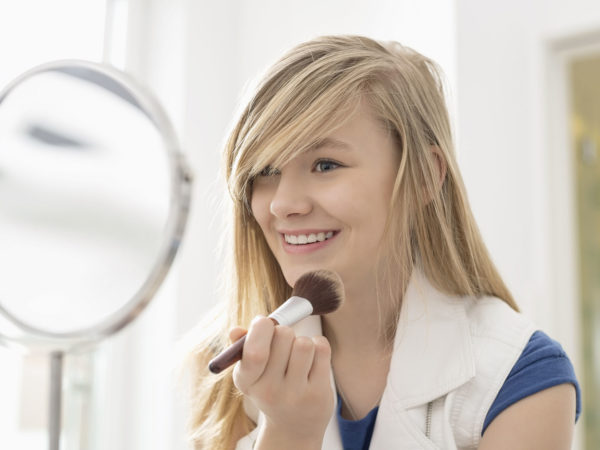 First, I should tell you that the incidence of precocious puberty has been rising in recent years. In girls this includes the development of breasts, armpit or pubic hair and the onset of menstruation before the age of 9. In rare cases, precocious puberty in girls is caused by tumors of the pituitary, hypothalamus or ovaries, but it is widely believed that obesity is responsible for most of it. We’ve long known that overweight girls mature into puberty earlier than slim ones.

That said, there is evidence from a new study performed at the University of California, Berkeley that prenatal exposure to chemicals in cosmetics and other personal care products may lead to early puberty in girls. (Boys don’t seem to be affected.) The chemicals include diethyl phosphate and triclosan, both known endocrine disruptors. They are found in toothpaste, soap, fragrances, and shampoos as well as cosmetics. The FDA banned the use of triclosan in hand soap in 2017, but it is still used in one line of toothpaste (Colgate Total). Exposure to triclosan is so  pervasive that the U.S. Centers for Disease Control and Prevention reports that it can be found in the urine of 75 percent of all U.S. residents, as well as in plasma and breast milk.

The Berkeley researchers measured concentrations of phthalates, parabens and phenols, including triclosan, in the urine of pregnant women twice during pregnancy and took urine samples from their children at age 9. Then they followed 338 youngsters to see whether their exposure to these chemicals would affect their development. They found that a doubling of paraben levels in girls was associated with the onset of breast and public hair development one month earlier than usual.

Girls who had higher concentrations of parabens in their urine at age 9 also experienced puberty at young ages. It isn’t clear that the chemicals were solely responsible for these changes or whether the girls who reached puberty earlier were more likely to start using personal care products themselves at younger ages. The investigators suspect, however, that many chemicals in personal care products can interfere with natural hormones, leading to early puberty. (Studies have shown that exposure to these chemicals can affect reproductive development in rats.) Early puberty can have a big health downside: it has been associated with increased risk of breast and ovarian cancer in girls, testicular cancer in boys and mental illness in both.

The FDA does not require proof of safety before cosmetics products reach the market. You can help avoid phthalates by choosing fragrance-free products. (But be aware that those labeled “unscented” may still contain phthalates.) And you can learn how to avoid other chemicals in personal care products by following the Environmental Working Group’s guide to personal care products called SkinDeep.