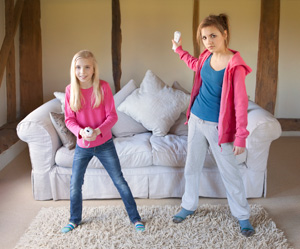 In the United States, there’s a virtual epidemic of precocious puberty these days – the onset of puberty at very young ages in both boys and girls. Among Caucasian girls today, 1 in 7 starts to develop breasts or pubic hair before she is 8 years old. Among African-American girls, the number is 1 out of 2! Unfortunately, no one knows why this is happening, although there’s plenty of speculation. Precocious puberty can be triggered by tumors in the pituitary gland, hypothalamus, ovaries, or testicles, but these cases are rare. Environmental factors are more likely to blame for the upsurge in cases today. The theory with the most scientific support is that obesity is responsible. I think this may be true, since we’ve long known that overweight girls mature physically earlier than thin ones.

Research also has suggested that environmental pollution may play a small role. In the spring of 2000, results of a study reported in the Journal of Pediatrics showed that boys exposed to DDE (a breakdown product of DDT) were heavier than their peers, while girls exposed to PCBs were heavier than their peers and tended to reach puberty a bit sooner, even though the actual numbers involved in the study were not deemed statistically significant. (Both DDT and PCBs are chemicals that appear to interfere with the body’s own hormones.) Researchers are also looking at other environmental chemicals – among them Bisphenol A (BPA), used in manufacturing plastic – but so far haven’t found a definitive link.

Unfortunately, there’s not a lot to offer in terms of treatment and no natural remedy that I can suggest. Since it’s occurring so often these days, some physicians believe that precocious puberty in girls between the ages of 6 and 8 should be seen as normal and not treated at all. (We do know that the risk of breast cancer later in life increases with an earlier onset of puberty.) The only approved allopathic treatments are two drugs: Gonadotropin-Releasing Hormone, GnRH, and Luteinizing Hormone-Releasing Hormone, LHRH, both given by daily injections or at intervals of every three to four weeks. These drugs interfere with the hormonal changes responsible for precocious puberty, in effect putting them on "hold" until the child reaches a more appropriate age (typically between the ages of 11 and 13 in girls). The drugs may also reverse the changes that already have taken place.

The physical changes are only one aspect of what girls must contend with as a result of precocious puberty. Because they look like young women, they’re often treated as if they were much older than they are by boys (or men who should know better) and may also be teased by friends and at school. If you are a parent with a child in the midst of precocious puberty, you must keep the parent-child lines of communication open. Make sure that your child understands that despite the change in her appearance, he or she is still a child.