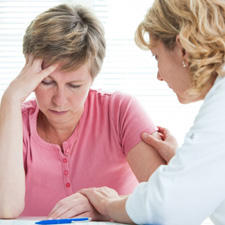 Endometriosis is an often painful condition that develops when tissue that looks and acts like the endometrium (the lining of the uterus) migrates outside the uterus. This tissue can implant itself in diverse places: on the fallopian tubes, ovaries, the ligaments supporting the uterus, in the area between the vagina and rectum, on the outer surface of the uterus, or on the lining of the pelvic cavity. Although displaced, it continues to act as if it were still in the uterus. Every month, in response to hormonal signals, it thickens, breaks down and bleeds. With no route out of the body, the trapped blood can cause inflammation, pain, scar tissue formation, adhesions, and bowel problems. An estimated 6 to 10 percent of women of reproductive age are affected.

Research from Harvard Medical School and Brigham and Women’s Hospital in Boston published in March of this year (2016) found that women with endometriosis are 1.52 times more likely to have a heart attack than women who don’t have this condition. The study also showed an increased risk of angina (chest pain) that was 1.91 times higher in women with endometriosis and a likelihood of needing surgery or treatment to open blocked arteries that was 1.35 times higher. Most alarming was the finding that women age 40 or younger with endometriosis were 3 times as likely to have a heart attack than women of a similar age in the study who didn’t have the condition.

To arrive at these conclusions, the researchers reviewed data on 116,430 women participating in the Nurses’ Health Study II launched in 1989. Their intent was to study diet and lifestyle risk factors in women younger than those enrolled in the earlier Nurses Health Study 1. The review revealed the heart disease risks among the 11,903 women in the study diagnosed with endometriosis over 20 years of follow up.

The increased risk of heart disease seen in the women with endometriosis may be due in part to the common surgical treatment for the condition: complete hysterectomy, including removal of the ovaries. This results in surgically induced menopause, which is known to increase women’s risk of heart disease.

The best way for women with endometriosis to protect themselves is to adopt heart-healthy lifestyle habits, regardless of age. They should be screened for heart disease and knowledgeable about its symptoms. Heart disease is the primary cause of death in women, whether or not they have endometriosis. You can find my advice on how to lower your heart disease risk on my website.