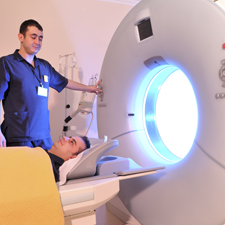 Probably not. MRIs generally can’t tell you what kind of headache you have and aren’t recommended for this purpose. However, that message hasn’t been getting across well to patients and some doctors. A new study found that patients who complain of headaches are much more likely to be sent for MRI or CT scans (which also aren’t recommended as a first diagnostic procedure for headaches) these days than was true a decade ago. The study, from Boston’s Beth Israel Deaconess Medical Center, found that rates of MRI and CT scans for headaches nearly doubled from 1999 to 2010 even though no more people are suffering from migraine or bad tension headache now than was the case in the past. The study also found that referrals of headache patients to other doctors nearly doubled in the same time span. The headaches aren’t any different than decades ago. What appears to have changed is patients’ awareness of the availability of advanced diagnostic tests and their requests for them.

The study also found that doctors who refer patients for MRI or CT scans generally aren’t offering the lifestyle counseling that is considered more worthwhile than the tests.

An estimated 94 percent of patients who seek medical help for headache have migraine and do not require imaging studies, according to the American Headache Society. These tests are considered appropriate only for very specific headaches, such as severe episodes that come on suddenly and those accompanied by seizures. Imaging can also be useful in cases of a change in the pattern of headache, an onset of headaches after age 50, headaches related to an injury, and those accompanied by confusion, weakness, numbness, coordination problems, altered speech or consciousness, or headaches related to serious medical conditions such as cancer or HIV.

Despite medical guidelines recommending against imaging tests for patients with headache, a University of Michigan study reported last year (2014) that almost $1 billion per year is spent on these scans. The researchers determined that some 51.1 million headache-related patient visits occurred between 2007 and 2010 – nearly half of them associated with migraine. The vast majority of these patients were under age 65 and three-quarters of them were women. During those four years, 12.4 percent of these doctor visits resulted in a brain MRI or CT. Past research has determined that only one to three percent of scans of patients with repeated headaches show that a growth or blood vessel problem in the brain is to blame.

"There’s solid research showing that the number of times you find serious issues on these scans in headache patients is about the same as that for a randomly chosen group of non-headache patients," said lead researcher Brian C. Callaghan, M.D. in a press release accompanying publication of the study in 2014.

The overwhelming likelihood is that your headaches are migraine or tension headaches, and that your doctor made the right call in telling you that you don’t need an MRI. That’s the sign of a competent medical practitioner, and not a reason to switch.