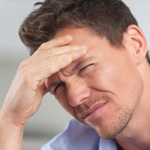 You’re describing visual migraines – also called ocular or silent migraines. (The medical term is acephalgic migraine, which means migraine minus the headache.) They often begin with seeing a small, shimmering area with zigzag edges that disrupts vision as it slowly expands outward. Typically, visual migraines last 20 to 30 minutes and then disappear. (When these symptoms occur in individuals with classic migraines, the headache soon follows the visual auras.)

Visual migraines are more common than you might suppose. They can occur in individuals of all ages, but they’re more than twice as common in women, and research suggests that their incidence increases during perimenopause. Children who experience visual migraines are likely to develop classic migraine later in life, but of all the people with migraines, only five percent experience the visual variety.

The cause of visual migraines is thought be the same as the cause of the classic form: activation of a mechanism deep in the brain and the subsequent release of inflammatory substances that affect nerves and blood vessels of the head.  We still don’t know why this happens or why visual migraines come and go as quickly as they do. Imaging studies have revealed changes in blood flow to the brain during ocular migraines and visual auras, but they haven’t identified the underlying cause.

If your visual migraines are persistent, you may want to consult a neuro-opthalmologist, the medical specialist best qualified to help you manage your condition. However, most people who have visual migraines experience them so infrequently that no treatment is needed. The first one or two can be anxiety-provoking, but once you know what to expect – that the episode will pass within minutes – you’re likely to be less concerned. If you’re having what you think are visual migraines but aren’t sure, it is best to have your eyes checked to make certain there’s no problem with them or with another part of your visual processing. If the visual changes come out of the blue and you’ve never experienced them before, be sure to consult a neurologist to rule out the possibility of a transient ischemic attack (TIA) or an ischemic stroke.

There’s no specific treatment for visual migraines that come infrequently and go fairly quickly. You may want to rest until the disturbance passes. Drinking a cup of coffee at the onset may help abort an episode. Some neurologists suggest that eating something or taking an over-the-counter medication such as ibuprofen may also help.

Since migraine headaches can be triggered by stress, certain foods, changes in the weather and lack of sleep, you might try to identify a trigger for your visual migraines and then avoid the substance or circumstance to see if that helps.