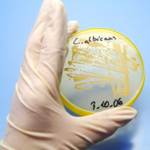 Your patient has bought into the scientifically unfounded notion that Candida albicans, a species of yeast that normally lives harmlessly in the gastrointestinal tract and vagina, can routinely become a serious systemic infection responsible for a host of ailments. Systemic candidiasis is said to cause fatigue, depression, anxiety, skin eruptions, and immune system malfunction.

In fact, Candida albicans, sometimes can get out of control, causing vaginal infections, intestinal upsets, or infections of the mouth and throat (called thrush). In most cases, this is the result of prolonged or frequent use of antibiotics, which can wipe out the "friendly" bacteria that normally keep yeast in check. Other drugs that can wipe out intestinal flora or encourage overgrowth of yeast are steroids and estrogen, either in the form of birth control pills or hormone replacement therapy.

A book called "The Yeast Connection" by Dr. William Crook popularized the hypothesis that Candida is a major pathogen that can weaken the immune system, allowing other infections to occur. Dr. Crook also contends that toxins produced by Candida could contribute to the development of multiple sclerosis, rheumatoid arthritis and other autoimmune disorders.

There is little hard evidence for these ideas. Diagnoses of systemic candidiasis usually have no scientific basis, and most of the recommended treatments for it waste time and money. Anyone with yeast growing in the blood or vital organs would be critically ill in an intensive care unit. Despite this medical reality, systemic candidiasis remains a popular diagnosis in some segments of the alternative medicine community. My belief is that its persistence is an example of our fears of foreign invaders; it satisfies a need to blame our maladies on an external cause.

Most of the treatments used for this "disease" are harmless except for drugs like ketoconazole (Nizoral) and fluconazole (Diflucan) which can be toxic to the liver and should not be used except on the advice of an infectious disease specialist. A study reported a few years ago in the New England Journal of Medicine found that the more commonly used drug nystatin (Mycostatin) was no more effective than a placebo in treating people who thought they had systemic candidiasis.

My colleague and naturopathic physician, Judy Hutt, NMD, points out that although systemic candidiasis is an unfounded diagnosis, one should not ignore chronic gas and bloating and other refractory gastrointestinal complaints that develop after taking large doses of antibiotics or steroids. In addition to oral or topical antifungal treatments, other natural therapeutic options include taking a good acidophilus product (such as Lactobacillus GG) to help restore normal gut flora, cutting back on refined sugars, avoiding dairy products, and eating one clove of garlic per day, preferably raw.