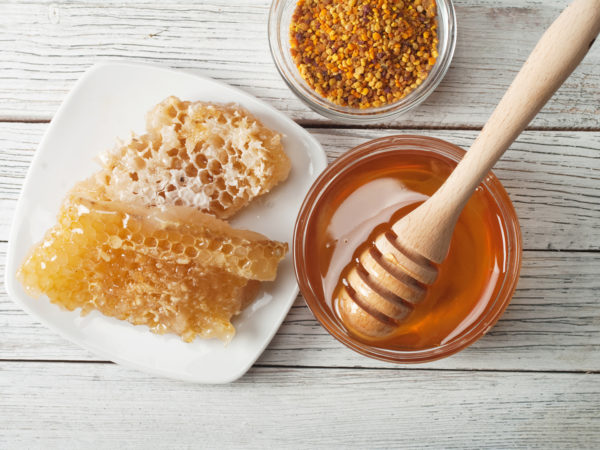 Honey is an ancient remedy that can help heal many kinds of wounds, including some serious ones that don’t respond well to conventional treatments. Part of the reason honey may work so well is due to an enzyme added by bees. This natural compound results in the formation of small amounts of hydrogen peroxide, an effective germicide against many bacteria that cause wound infections. Some types of honey, particularly manuka, from New Zealand, have additional components with antibacterial effects that make them much more potent than other varieties. Manuka honey has been reported to inhibit more than 80 species of bacteria, but exactly how it does this isn’t fully understood.

Manuka honey is produced by bees that pollinate the manuka shrub (Leptospermum scoparium) native to New Zealand. Its active ingredient, methylglyoxal (MG), is a compound found in small amounts in most types of honey. In manuka honey, MG comes from the conversion of dihydroxyacetone – a substance which is highly concentrated in the nectar of manuka flowers.

To find out how concentrated MG is in manuka honey, look for the Unique Manuka Factor (UMF) ranking on products. The UMF scale rates the potency of manuka honey based on how much MG it contains. A rating of 10 UMF or higher is considered therapeutic; these products may be labeled “UMF Manuka Honey” or “Active Manuka Honey.”

Only manuka honey that has been sterilized and prepared as a dressing for wounds and burns should be used to treat these injuries. Some studies suggest that manuka dressings can speed the healing of mild burns, compared with traditional dressings, but other research has shown that while manuka honey is effective against bacteria, it isn’t necessarily more effective than standard treatments. The latest news on the powers of manuka honey comes from a study published in 2012 by researchers at Cardiff Metropolitan University in Wales showing that it can destroy the skin bacteria Streptococcus pyogenes, which is frequently linked to wounds that won’t heal; the study also showed that the honey can prevent the bacteria from binding to wound tissue in the first place.

Many claims have been made for manuka honey – that it can lower cholesterol, prevent and treat cancer, reduce inflammation and treat diabetes. A German study published in 2009 found that contrary to claims, manuka honey is not effective for lowering cholesterol. No major studies have investigated the effect of manuka honey on cancer or diabetes. However, there is some evidence that it can help prevent gum disease by reducing plaque buildup. A study from India published in Contemporary Clinical Dentistry in 2010 found that manuka honey worked as well as chlorhexidine mouthwash (an antimicrobial solution) and better than xylitol chewing gum for prevention of gum disease by reducing plaque buildup. In New Zealand, researchers looked into anecdotal evidence suggesting that manuka honey is good for digestive health but eventually reported that it had “no beneficial effects on lower gut bacterial levels” in their study’s healthy volunteers.

You might consider using manuka honey at home for treating minor cuts and burns, but if you have a bad burn or an open wound, be sure to get prompt medical treatment. Using honey correctly to treat a serious wound requires considerable expertise. For more information on this subject, visit the Waikato Honey Research Unit where much of the research into honey’s healing properties is being done.