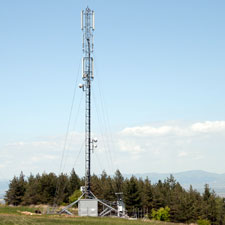 I wish I could give you a definitive answer, but the fact is, we don’t know for sure whether cell phone towers (also known as base stations) pose a health risk to humans living nearby. These towers send high-powered signals that can travel several miles to establish contact with individual cell phones. When you talk on one, the signals surround your body with low levels of sustained radiation. This risk of living near a tower may not be the same as that from radiation that penetrates your head while you’re using your cell phone. However, the existence of the risk – or the extent of it, if it does exist – isn’t known, because few human studies examining these questions have been completed.

Even so, in 2011 the International Agency for Research on Cancer (IARC), an arm of the World Health Organization, classified environmental exposures associated with transmission of signals for radio, television and cell phone communication as "possibly carcinogenic," based on an increased incidence of glioma, including glioblastoma, a highly malignant type of brain cancer, associated with them. However, the IARC noted that the current evidence was inadequate to draw a firm conclusion about risk.

Because cell phone technology is so new and is evolving so rapidly, we don’t have reliable data on the health consequences of 10, 20 or 30 years’ worth of exposure to the forms of energy it uses. The American Cancer Society, which concedes that few human studies have focused specifically on cell phone towers and cancer risk, defers on its website to "most scientists" who agree that radiation from towers is unlikely to cause cancer.

One reassuring report suggests that exposure during pregnancy does not pose a cancer risk to young children. Researchers from Imperial College London collected data on nearly 1,400 children under the age of four who had leukemia or other types of cancer and matched them by gender and birth date with healthy kids. The team also factored in the distance each child lived from a cell tower at birth and the power output of each tower. The comparison showed no association between the risks of early childhood cancer and the estimated exposure of the mothers during pregnancy. Results of the study were published in June 2010 in TheBritish Medical Journal.

That’s good news, but we still don’t know the risks, if any, posed by long-term exposure to adults and older children.