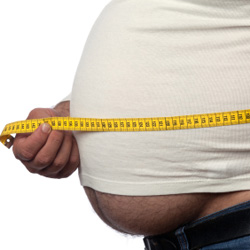 Breath tests are gaining ground as a means of diagnosing and screening for some common and some potentially life-threatening conditions. While still experimental, the breath test used to predict obesity can reveal the presence of certain micro-organisms in the digestive tract that are correlated with weight gain.  A study published in the April, 2013, issue of the Journal of Clinical Endocrinology & Metabolism demonstrated that high concentrations of hydrogen and methane in the breath often correlate with known indicators of obesity. Researchers from Cedars-Sinai in Los Angeles found four patterns when they analyzed the breath of 792 people: normal breath, high concentrations of methane, high concentrations of hydrogen, or high concentrations of both methane and hydrogen. This last pattern was associated with higher body mass indexes (BMI) and higher body fat percentage. The microorganism Methanobrevibacter smithii produces most of the methane in humans, and when its population grows, it may alter digestion to allow the extraction of more nutrients and calories from food, resulting in weight gain. Investigators are now studying whether an antibiotic aimed at M. smithii could lead to a positive change in this scenario.

Another new breath test, based on a single exhalation and a patient’s individual "breath print" comes from the Cleveland Clinic; it appears to identify patients with heart failure. A study published in the April 2, 2013 issue of the Journal of the American College of Cardiology showed that analysis of volatile organic compounds (VOCs) from exhaled breath can reliably identify heart failure patients and distinguish them from those with other heart problems with 100 percent accuracy. Because the study was small, however, larger investigations will be needed to confirm the findings.

At least 1,000 different chemical compounds have been identified in human breath. Deviations from normal patterns could be tip-offs to specific diseases. There is, of course, the famous Breathalyzer test to determine if you’ve been drinking alcohol – and if so, how much. So far, six medical breath tests have been approved by the FDA, among them one that reveals whether asthma medications are working; a test for high levels of hydrogen that can pinpoint lactose intolerance; one to identify the presence Helicobacter pylori (H. pylori), the organism that causes many ulcers; and another that can signal the rejection of a transplanted organ. Breath tests under development could improve diagnosis of lung cancer, colorectal cancer, tuberculosis, diabetes, and multiple sclerosis.

And, of course, bad breath can indicate gum disease, diabetes, a gastrointestinal problem or liver or kidney disease.