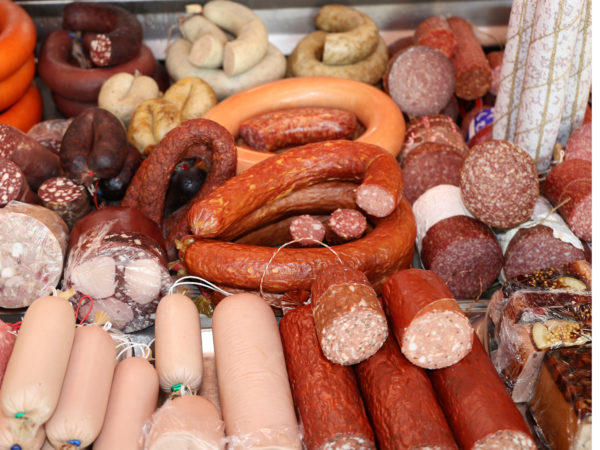 You’re referring to a report from the World Health Organization’s (WHO) International Agency for Research on Cancer (IARC) concluding that processed meat is a carcinogen and that red meat is a “probable” carcinogen. For the record, the IARC considers “processed meat” to be any type that has been “transformed through salting, curing fermentation, smoking, or other processes to enhance flavor or improve preservation.” This definition applies to hot dogs, bacon, sausage (including chicken and turkey bacon and sausage), cold cuts and canned meat. Red meat includes beef, pork, lamb, veal, mutton, goat and horse.

These findings aren’t really new – we’ve known for some time that processed meats are associated with higher risks of colorectal and stomach cancer. The IARC also reported an association between consumption of red meat and colorectal, pancreatic and prostate cancers.

The cancer-causing chemicals in processed meats are believed to develop during the salting, curing or other methods involved in producing commercial products like bacon and sausage. High-temperature cooking of steaks and other cuts of red meat produces heterocyclic aromatic amines and polycyclic aromatic hydrocarbons, both of which are suspected carcinogens.

The question you pose – how much of these meats is it safe to eat – is tricky. No one knows the answer. The IARC reviewed more than 800 scientific studies on the cancer/meat connection and reported evidence suggesting that that every 50 gram (about 1.76 ounces) portion of processed meat eaten daily increases the risk of colorectal cancer by about 18 percent and that the risk of colorectal cancer could increase by 17 percent for every 100 gram (about 3.5 ounces) portion of red meat eaten daily. Most of the experts quoted in news reports about the IARC findings hedged when asked about safe amounts of red meat and processed meats. However, the World Cancer Research Fund International suggests limiting red meat consumption to 18 ounces a week and processed meat consumption to “very little.” Probably, the less of these meats you eat, the better.

Bear in mind that the increased risk of cancer reported by the IARC represents relative risk: if the normal risk is that one person in a group of 100 develops cancer, an increase of 15 percent means that 1.15 people in 100 would be at risk, while a 20 percent increase means that 1.20 persons in 100 are at risk. That may sound like nothing to worry about on a personal level, but spread across the population it can add up to a lot of individuals. The IARC estimated that eating processed meat accounts for 34,000 cancer deaths per year.

My anti-inflammatory diet includes only one to two servings a week of lean meats and skinless poultry.