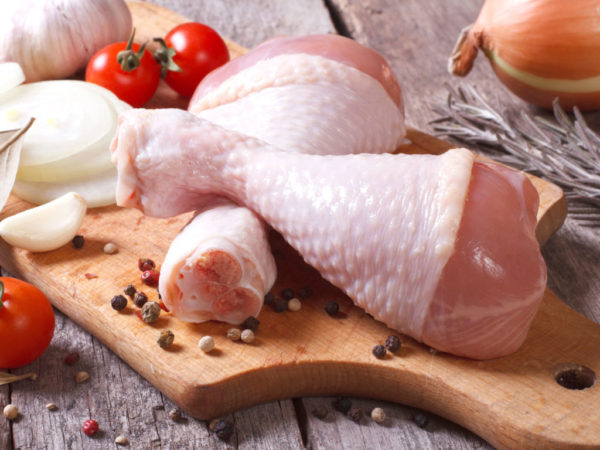 MRSA stands for Methicillin-Resistant Staphylococcus aureus, otherwise known as the “superbug” because the infections it causes resist treatment with some of our most powerful antibiotics. The news that MRSA can spread to humans who eat or handle poultry comes from an international study that identified a new strain of the superbug that infected 10 people in Denmark.

Researchers have known for some time that farmers, farm workers, veterinarians and others who work with livestock are at risk of MRSA infections. The new findings show that consumers who have no direct contact with livestock can still become infected by eating or handling contaminated poultry meat, most likely chicken and turkey. The researchers reported that while MRSA is often found in chicken, pigs and other food animals, a newly identified strain was responsible for the infections in Denmark. Lead investigator Jesper Larsen, Ph.D., said this poultry-associated MRSA “may be more capable of transmitting from food to people. As MRSA continues to evolve, it may spread from animals to people in new ways.”

The research team reviewed the national database at the Statens Serum Insitut (Denmark’s CDC) and found 10 people living in urban areas who had been infected or hospitalized with MRSA infections. None worked on farms or were exposed to farm animals. A genetic analysis of the bacteria from these 10 people showed that the bug was a strain associated with livestock that hadn’t been seen before. It was not found in Danish livestock but was traced to poultry imported from elsewhere in Europe.

There’s little question that the use of antibiotics in raising farm animals has led to the increase in superbugs. Unfortunately, food inspectors don’t test poultry and other types of meat for MRSA contamination. The researchers called for an expansion of the number of pathogens tested for in the food supply and for international leadership to reduce unnecessary use of antibiotics on farms throughout the world.

The possibility of picking up MRSA through the food on your plate is alarming and strengthens the case for choosing meat from organically raised animals. In the U.S., some efforts have been made to reduce or eliminate the use of antibiotics in poultry. In 2005, the FDA banned the use of fluoroquinolones, a class of antibiotics that includes Cipro, in poultry production. And in another positive move, major poultry producers have announced plans to phase out the use of any antibiotics that are also used in human medicine.

However, according to the Infectious Diseases Society of America, one in five MRSA infections are now caused by transmission from food or animals. MRSA infections cause more than two million cases of illness each year and more than 23,000 deaths.