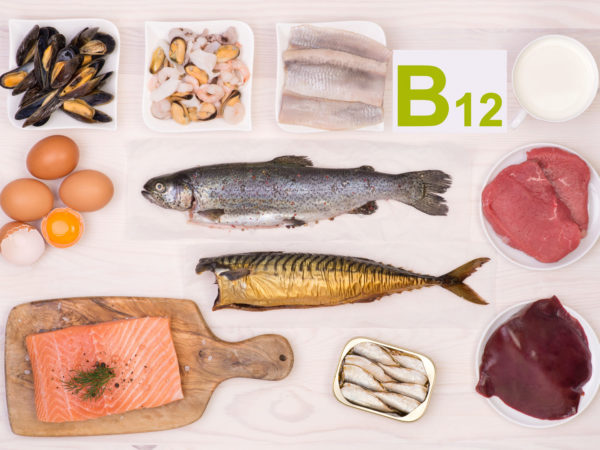 Vitamin B12 is a water-soluble vitamin that is part of the B complex. It helps support bone marrow and adrenal function and maintains a healthy nervous system. And recent evidence suggests that supplementing with vitamin B12 may help prevent age-related cognitive decline.

As we get older, the body becomes less efficient at absorbing B12 from food. All dietary B12 comes from foods of animal origin: meat, fish, eggs or dairy products. It’s estimated that B12 deficiency affects between 1.5 percent and 15 percent of the U.S. population. Older adults are more likely to be affected because between 10 and 30 percent have a condition called atrophic gastritis, which decreases secretion of hydrochloric acid in the stomach and results in decreased absorption of B12. The risk of deficiency is also increased among those (old or young) who take over-the-counter or prescription drugs for acid reflux and heartburn – proton-pump inhibitors (PPIs) or histamine-2 receptor antagonists (H2RAs).

There’s no doubt that low vitamin B12 status can bring on cognitive decline. The question is whether supplementing with B12 will help reverse that condition. In early studies, it didn’t seem to help, but more recently, researchers at the Oxford University in the U.K. and at Norway’s University of Oslo found in a 2-year study that high doses of B12 reduced the brain shrinkage (cerebral atrophy) associated with mild cognitive impairment in seniors age 70 and over.

However, the beneficial effect was seen only among those who had high levels of the amino acid homocysteine, which may be associated with formation of “tangles” in brain cells that disturb communication. The investigators suggested that the high homocysteine levels might be due to a lack of vitamin B12. Study participants with low levels of homocysteine didn’t show improvements with B12 supplementation.

Symptoms of B12 deficiency include fatigue, tingling and numbness in the hands and feet, muscle weakness and loss of reflexes. As the deficiency worsens, symptoms progress to confusion, depression, memory loss and dementia, which sometimes can be reversed with B12 supplements. In a case described in the Journal of Clinical Psychiatry in 2009, a 66-year old woman suffering from severe depression, psychosis, loss of energy and loss of interest in life turned out to be deficient in B12. A series of injections of the vitamin reversed her symptoms.

To help prevent deficiencies individuals over 50 years of age should consume vitamin B12-fortified foods, or take a vitamin B12 supplement. I recommend taking 50 mcg of B12 as part of a B-complex that contains a full spectrum of B vitamins, including biotin, thiamin, riboflavin and niacin.

For anyone concerned about an actual deficiency as well as for people over 50, I recommend B12 in the form of an oral spray for better absorption.

S.J. Eussen et al, “Effect of oral vitamin B-12 with or without folic acid on cognitive function in older people with mild vitamin B-12 deficiency: a randomized, placebo-controlled clinical trial. American Journal of Clinical Nutrition, August, 2006.