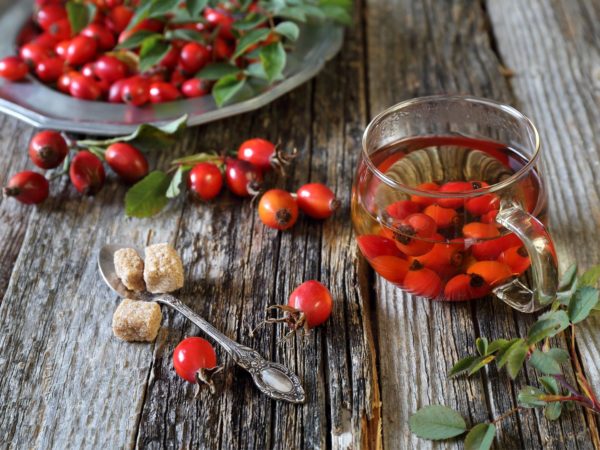 Rose hips are the fruit of the rosebush. They develop after the petals have dropped off the flowers. In the fall, some varieties are orange or red, and they range from the size of a cranberry to that of a small plum. They have a lot of seeds and a bit of tart pulp. Rose hips have a very high vitamin C content, providing even more than citrus fruits. During World War II, when citrus imports were limited, rose hips became quite popular in Britain where they were used to make nutritious rose-hip syrup.

Most varieties of roses cultivated in this country don’t develop usable rose hips, but old-fashioned plants such as rugosas do bear them. And in many parts of the country, you can easily collect the hips from wild roses. If you find them, you can try using them to make tea (or jam, syrup or jelly). Avoid a bush that has been treated with a pesticide. (If it has, make sure that the pesticide was labeled safe for food crops before gathering rose hips.) And don’t cook the rose hips in aluminum pots or stir with aluminum utensils, both of which destroy the vitamin C. To make rose-hip tea, wash the hips well, chop them up, cover them with cold water, bring to a boil, cover and simmer for 30 minutes. Then, strain the tea and sweeten it if you like. You also should be able to buy rose hip tea in health-food stores.

I know of no advantage to buying rose hip vitamin C. You may get trace minerals and other compounds that are healthy, but the vitamin C itself won’t be of any higher quality, just more expensive.

Vitamin C: Time for a Change?