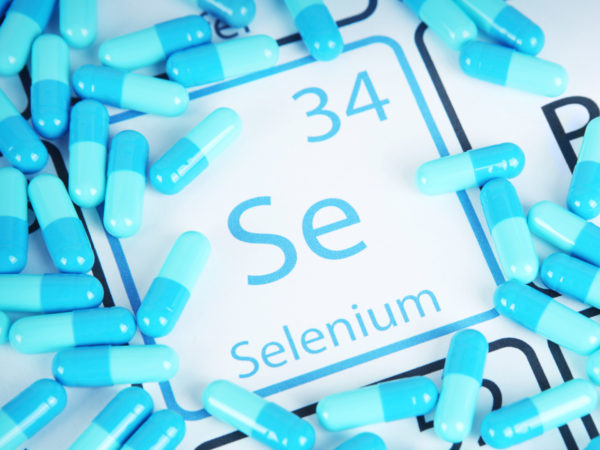 Humans require trace amounts of selenium, an element found in soil, water, and some foods to help the body defend itself from cellular damage caused by free radicals. One food rich in selenium is Brazil nuts. (One nut gives you 200 mcg, and the National Institutes of Health advises eating these nuts only occasionally because of their unusually high selenium levels.) Other sources are brewer’s yeast, wheat germ, garlic, grains, sunflower seeds, walnuts, raisins, shellfish and both fresh and saltwater fish.

One of selenium’s most valuable roles is as a cofactor of glutathione peroxidase, an important antioxidant enzyme. Selenium also helps support a strong immune system, regulates thyroid function and plays a role in the prevention of cataracts and heart disease. Some evidence suggests that it may help reduce the risk of prostate cancer.

The latest news about selenium and cancer comes from a large European study published in August 2016 in the American Journal of Clinical Nutrition. It enrolled 477,000 individuals who were followed for 10 years. Results showed that high blood levels of selenium were linked to a decreased risk of developing liver cancer for those in the study, even after taking into account all the other major risk factors for the disease. The new data show that the third of the European population with the lowest selenium status have a 5 to 10 fold increased risk of liver cancer, which is the second most common cause of cancer death worldwide. The researchers noted that European soils have low concentrations of selenium, especially in comparison to North America, and that varying degrees of deficiency are common there. The investigators also commented that earlier studies had suggested a similar relationship between a person’s selenium status and the risk of developing colon cancer and autoimmune thyroid disease.

In news reports, study leader David J. Hughes, Ph.D., was quoted as saying the new study results “tentatively suggest” that where selenium is lower than optimal, as it is for most people in Europe, increased intake may help prevent liver cancer. But he noted that risks of the disease are higher among overweight and obese individuals and that in addition to maintaining a healthy weight, other protective measures would include moderating or avoiding alcohol consumption and stopping smoking. He added that the new findings are based on a single study and need to be validated by additional studies before making any public health recommendations about selenium supplementation.

Dr. Hughes also noted that there is evidence from other studies that selenium intake may affect the risk of breast cancer, colorectal cancer and some types of prostate cancer.