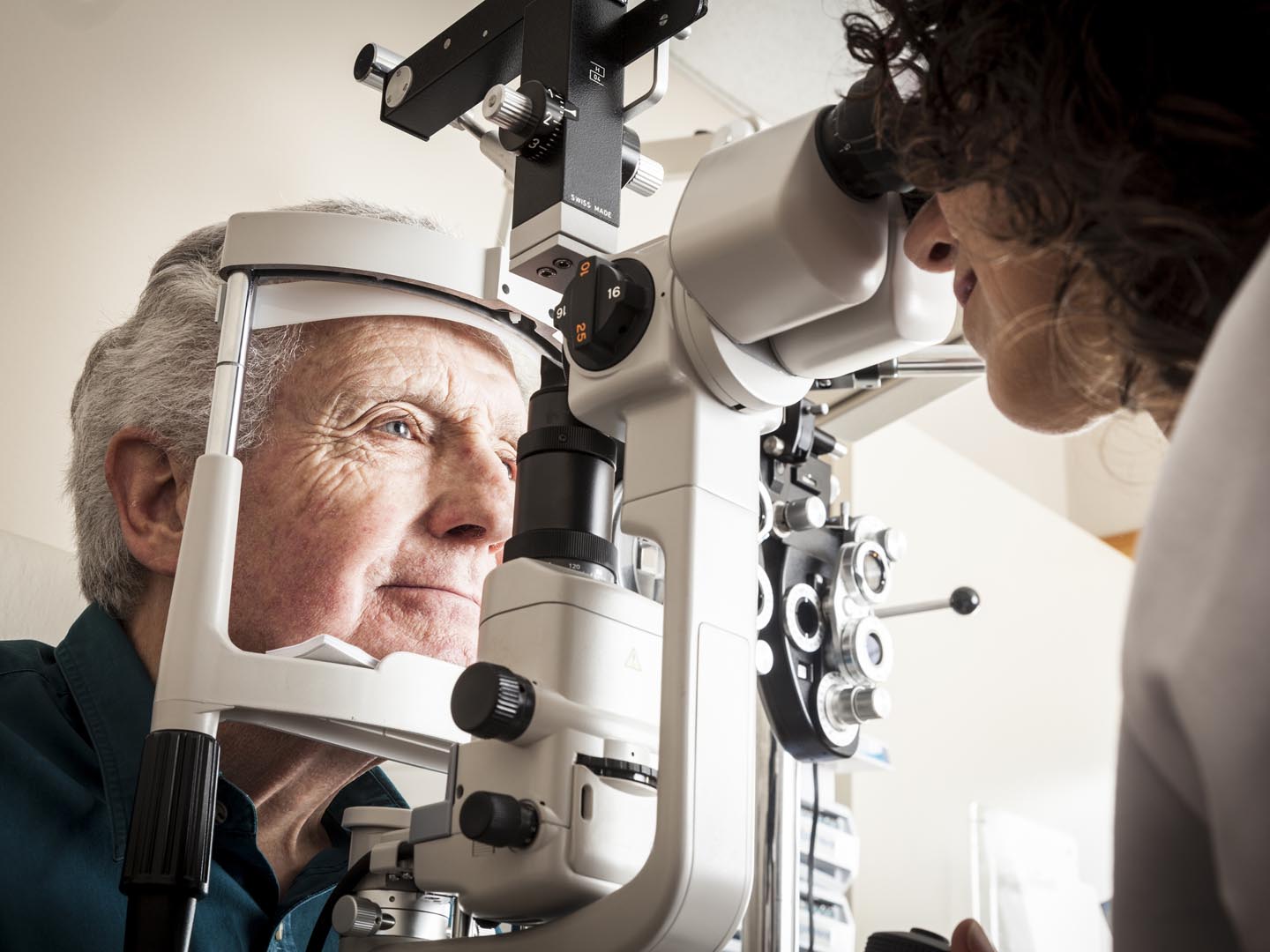 What are cataracts?
A cataract is a clouding of the lens of the eye. The lens is an oval structure made mostly of protein and water sitting right behind the colored iris and pupil. Protein molecules of the lens are arranged in such a way as to keep it transparent and allow visible light to pass through it onto the retina, the sensitive tissue at the back of the eye. The lens also adjusts the eye’s focus, allowing images to be seen clearly from both near and far away. Once this light reaches the retina, it is changed into nerve signals that are sent to the brain and interpreted as sight. For the retina to get a sharp image, the lens must be clear, otherwise vision becomes blurry.

With aging and exposure to ultraviolet light, the protein fibers of the lens, normally arranged in a precise latticework fashion, become oxidized and clump together. This clumping causes the lens to become increasingly cloudy. The lens itself has no nerve connections or blood vessels and is dependent on the liquid around it, called the aqueous humor, to get nutrients and remove waste products. This fluid is connected to a vascular network and contains very high levels of certain antioxidants that help nourish the lens as well as absorbing and detoxifying harmful substances. Lack of these antioxidants can cause cataracts to occur more frequently.

Cataracts are the leading worldwide cause of vision impairment and blindness. Cataracts are common in older people. By age 80, more than half of all Americans either have a cataract or have had cataract surgery. A cataract can occur in either or both eyes, but cannot spread from one eye to the other.

What are the symptoms?
Cataracts tend to grow slowly, causing subtle changes in vision at first and progressing over time. Difficulty with contrast and color interpretation or loss of distance vision can be early signs of cataract formation. As the lens becomes cloudier or the cataract gets bigger, vision becomes more blurry. One may experience difficulty reading signs or written material, have problems with night vision or suffer from a painful glare around lamps, headlights and light from the sun. Loss of depth perception, double vision and seeing halos or multiple images in one eye can often prompt a visit to the eye doctor.

Primary physicians can often diagnose cataracts using a handheld opthalmoscope. However, definitive diagnosis of cataracts is often done by an eye care professional who will do a comprehensive exam that usually includes drops to dilate your pupil and allow better visualization of eye anatomy, including the lens.

Detecting a cataract early is good news. Since they grow slowly, early intervention can stop or significantly delay further clouding of the lens.

What are the causes?
In general, poor eye health is related to a number of risk factors: exposure to ultraviolet light, poor nutrition and other lifestyle habits, stress, and chronic disease. The risk of cataract formation varies with these, as well as increased age, but getting a cataract is not inevitable as we age. Factors that can increase the risk of cataract formation include:

What is the conventional treatment?
The first cataract treatment is ensuring adequate eye protection. Parents should encourage their children, even infants, to wear sunglasses and other forms of eye protection. Wearing wide-brimmed hats and visors have long been suggested to block ultraviolet sunlight. Workers with hazardous occupations should always wear protective shielding and eye protection.

If you smoke or drink, find ways to stop or significantly moderate your consumption. Chronic diseases need to be aggressively treated, especially weight gain and diabetes. Patients with diabetes have three-to-five times higher risk of cataract formation than does the general population. Effective management includes avoiding both chronically high and low blood sugar, as each can injure the lens.

Medications should be assessed to see which ones might be photosensitizers, and steroid eye drops should be used for as brief a period as possible.

At age 50 or older, it is important to have a comprehensive eye exam at least once every two years. In addition to cataracts, your eye doctor can evaluate for age-related macular degeneration, glaucoma, and other vision problems. Early detection and treatment is the key.

Surgery is the only effective treatment for advanced cataracts that cause visual impairment. The procedure involves removing the cloudy lens and inserting an artificial implant. The complications of cataract surgery include infection, dislocation of the lens, retinal detachment and hemorrhage. However, with modern technology, this surgery is an exceptionally safe procedure. Most people notice an improvement in vision almost immediately after surgery. If both eyes have cataracts that require surgery, it usually will be performed on one eye at a time, with a four-to-eight week between operations.

What therapies does Dr. Weil recommend for cataracts?
The best thing you can do to prevent eye disorders is to make sure that your diet contains a variety of antioxidants found in fruits and vegetables. Both the lens of the eye and the aqueous humor contain protective enzymes that breakdown the damaged proteins that clump together and cause cataracts. Antioxidants keep these enzymes from being destroyed. Vitamin C, vitamin E (mainly tocopherols), glutathione, and a variety of carotenoids are present in lens tissue and in the fluid that surrounds it.

Lutein is one such carotenoid. It is a major component of the yellow and orange pigment found in many fruits and vegetables including mangoes, corn, sweet potatoes, carrots, squash, tomatoes and dark, leafy greens such as kale, collards and bok choy. There is very good evidence that the lutein in food helps protect against cataracts and macular degeneration, two common, age-related eye disorders. Lutein and another carotenoid, zeaxanthin, form the yellow pigment of the retina and help absorb ultraviolet blue light, a harmful component of sunlight.

You can get zeaxanthin in orange bell peppers, oranges, corn and honeydew melon. Egg yolks also contain both lutein and zeaxanthin, but if you have high cholesterol, you’re much better off getting the yellow nutrients from fruits and vegetables.

In addition to eating these foods, Dr. Weil recommends taking a good multivitamin-mineral that contains vitamin C, vitamin E in the form of mixed tocopherols and tocotrienols, mixed carotenoids (including lutein and zeaxanthin as well as beta-carotene) and the B-complex vitamins. He also recommends an anti-inflammatory diet, including essential fatty acids such as fish oil, and herbs like turmeric and ginger.