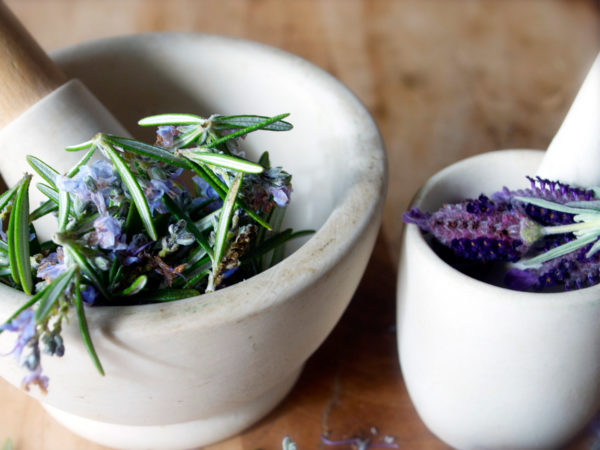 Lavender is a culinary and aromatic herb used for improving sleep and reducing stress in the body.

Lavender grows in a wide range of climates. It is easily cultivated in gardens but also considered an invasive species in many parts of the world. The plant is native to the Old World – Europe, Africa, Mediterranean, and southwest Asia into southeast India – but has since spread to other parts of the world including the Americas and Australia. Lavender has been used for thousands of years, dating back to ancient Greeks and Romans, and is even mentioned in the Bible.

Lavender is well known for its calming and pungent aroma, making it an attractive scent in aromatherapy. It is also used to soothe insect bites and burns, relieve headaches, and encourage sleep.

Lavender has been researched for its effects on sleep and relaxation. One study looked at the effects of an oral lavender preparation (80 mg a day) on 221 adults with anxiety disorder. By the end of the study, researchers found the lavender preparation had significantly beneficial effects on both quality and duration of sleep, and improved measures of mental and physical health, compared with placebo. The researchers also found the preparation to be safe and free of side effects. Other studies have found similar effects on sleep and anxiety when lavender oil is used in aromatherapy.

The Natural Medicines Comprehensive Database (NMCD) concludes lavender is possibly effective for hair loss (alopecia areata) when applied as part of a combination of other oils – some evidence suggests hair growth by as much as 44 percent after seven months. The NMCD states that there is emerging but currently insufficient evidence to rate the effectiveness of lavender for depression, sleeplessness (insomnia), migraine, and general psychological well-being.

Lavender Is Available In:

Lavender may enhance the effects of sedative and sleep medications, causing sleepiness and drowsiness. Use caution if you take these medications.

The NMCD rates lavender as “likely safe” for most adults in food amounts and “possibly safe” in medicinal amounts. Taking lavender by mouth may cause constipation, headache, and increased appetite, while applying lavender to the skin may cause irritation. There is insufficient information available regarding safe use during pregnancy or while breastfeeding, so you should avoid using lavender when pregnant or nursing.

Children, specifically young boys who have yet to reach puberty, should avoid lavender oil and products that contain lavender oil as they may disrupt normal hormone levels. In some cases, boys developed abnormal breast growth called gynecomastia. Effects on young girls are unknown.

Look for a standardized extract, either of lavender essential oil or a tincture.

Internal use – take 2-4 mL of lavender tincture three times a day. Lavender tea includes both leaf and flower and can be ingested before bed.

Aromatherapy – add 2-4 drops of lavender essential oil to 2-3 cups of boiling water – some people may experience lung and/or eye irritation.

Topical use – add 1-4 drops lavender oil per tablespoon of olive oil – avoid contact with eyes and mucous membranes. For bald spots (alopecia areata), one study combined the following essential oils: 3 drops of lavender, 3 drops of rosemary, 2 drops of thyme, and 2 drops of cedarwood, all mixed with 3 mL of jojoba oil and 20 mL grapeseed oil. This mixture was massaged into the scalp every night.

Lavender essential oil should only be used externally or as aromatherapy, as it is potentially toxic when ingested.

Lavender oil is not recommended for boys as some studies have linked its use to gynecomastia, or breast growth. Effects in girls are unknown at this time but because lavender oil may have estrogenic and anti-androgenic actions, topical lavender oil should be avoided for children until more studies are conducted.

Lavender grows exceptionally well in the climate of southern Arizona where I reside. I enjoy using dry bundles of lavender as a natural air freshener and hang them around the house including the bedroom where they provide a calming, peaceful aroma as I fall asleep. I also use lavender as a culinary herb and sprinkle small amounts of the herb on foods such as grilled salmon and lemon. Lavender is great to use for infusing water, giving it a unique flavor and providing an alternative to iced tea on a hot day.