Matcha tea is a special variety of green tea in which the whole, powdered leaf is consumed rather than just an infusion of the leaves. Matcha is an especially rich source of antioxidants and phytochemicals that have been associated with improved cholesterol ratios, increased metabolism, and even lowered cancer risk. One important polyphenol found in matcha is EGCG (epigallocatechin gallate), a potent antioxidant that is probably responsible for a good deal of matcha’s health-protective benefit. Dr. Weil’s colleague, Dr. Jim Nicolai, shows how to enjoy a delicious cup of matcha green tea.

Read an interview with Dr. Nicolai here, and see all of Dr. Weil’s videos here.

Video Transcript: How to Make Matcha with Dr. Nicolai

Hi! I’m Dr. Weil. Here’s some valuable health information from my friend, former student, and colleague, Dr. Jim Nicolai.
Hi, I’m Dr. Jim Nicolai. I’m the medical director for the Dr. Weil Integrative Wellness Program at Miraval Resort and Spa, and I’m going to talk to you about developing a taste for tea. This doesn’t mean that you don’t necessarily have to drink other caffeinated beverages, but if you can begin to start leaning more towards using good quality tea as an alternative to say, coffee, or soda, or other forms of caffeine. This can be a wonderful way for you to have less caffeine and get the benefits of tea that you might not get when you’re drinking other beverages. One of the main benefits of tea, right off the bat is it has probably a third to maybe even a half less caffeine than other drinks. But the magical quality of tea is, it has an amino acid called L-Theanine and L-Theanine is calmative. It creates a mental state of alert calm, which is not something found in any other caffeinated beverage. I often liken this to take a look at cultures around the world that use caffeinated beverages. Most of the time we drink coffee to get wired, and if you ever look at tea time, tea time is based on stepping back, slowing down calming down. You get the benefits of that through what’s in the beverage and so that’s the magic of what tea can give you.

So, in developing a taste for tea, my favorite drink is green tea and my favorite green tea is matcha. Matcha has a great story for me, it was one of the things that Dr. Weil turned me onto when I was first training with him and I remember my first cup of matcha tea was like drinking essence of summer time. Green …defined. And so what I’d love to do is demonstrate how to make matcha tea and the practice that’s involved in it because it’s not just getting a cup of tea and letting it steep. There’s a meditation involved, that’s a wonderful practice to learn how to do. You have to understand that tea or green tea, is from one plant, the Camellia sinensis plant and what matcha is, is it’s the tea leaves ground into a fine powder. And so what happens is, what you’re drinking, it’s not necessarily what we would call a suspension. It’s a solution, meaning, you’re not taking the hot water and letting the components of the tea come into the water. You’re actually drinking leaves suspended in the water and so you’re really drinking a green drink. You’re drinking a plant that’s into a solution.

One of the things about matcha is that this green tea powder is concentrated and it has all the healthy benefits of green tea, things like the antioxidants that we call polyphenols that help with preventing heart disease, lowering cholesterol. Macha has concentrated antioxidants, one of which is called EGCG. The big “doctor” term for this is Epigallocatechin gallate. EGCG is better to know and EGCG kills cancer cells and protects them, or causes them to not grow as fast. So this is an anti-cancer benefit that you’re getting with matcha that’s much more concentrated than any other form of tea or green tea that you might be drinking. 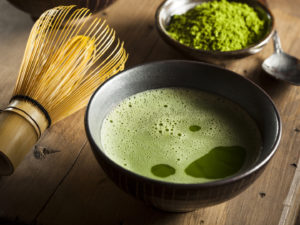 So the first thing that we do when we’re preparing matcha is, you have to know your instruments and the first instrument that you get to know is what we call the matcha bowl or the Chawan. The Chawan is something that most people don’t drink tea out of. This is an ornate clay bowl that’s made in an artisanal-kind of way and it’s made in some fashions to be extremely ornate. It can be just a regular bowl that you drink out of, but the first thing that you do is you warm the bowl and what you do is, you boil water and you pour it into the bowl. Notice the steam coming out of it. You want to get the water to boiling and then turn it off because what you want to do is ultimately drink the tea right around 180 degrees. So you want to let the water cool down just a bit so that you’re getting it at that temperature. And then what you do is, you allow the bowl to warm up for probably about 30 to 60 seconds and the warm water will cause the bowl to heat up a little bit. Then once the water is warm enough, you want to discard it and then just dry it out. And you can use a paper towel or a napkin or anything that just causes it to be dry.

From there, you then just use your matcha and there’s a couple of ways to do this. The first thing about matcha is, is that because it’s a powder it can tend to get clumpy, so one of the things that you can do is you can use a filter to cause the clumpiness to get into a fine powder. This has already been pre-filtered and it’s in a nice ornate bowl that allows the powder to stay pretty fine. And what you want to do is, you want to use this spoon, which is also called a Chashaku and put somewhere between one to two clumps of tea in so that this is about how much tea that you have and then you pour water in. And the trick with matcha is that matcha is not necessarily something that you drink as a beverage where you pour the water all the way full. What the goal for matcha is, is to drink this, this tea beverage in somewhere between three or four large drinks or large slurpy drinks. You use the whisk, which is made out of bamboo. Leave it to the Japanese to make something so beautiful, right? And what you’re doing is your stirring this powder into fine frothy liquid so that ultimately, it has froth to it. And if you smell it, it really has a smell of grass or spinachy, plants based vegetal aromas. And one of the ways that you drink it is with a very, very large slurp.

Essence of green… and so what I will do is, I’ll drink this often times with my breakfast as a quick way to get a caffeinated beverage into my body that’s energizing, filled with antioxidants, green, along with all the other colors that I use and it’s a wonderful way to start the day.