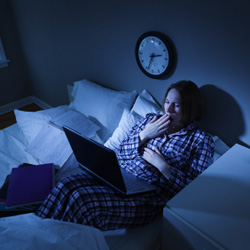 The relationship likely works in both directions. I wrote about the link between insomnia and depression in my book Spontaneous Happiness. It is estimated that about 90 percent of patients with major depression have difficulty falling asleep and staying asleep. Sometimes, the insomnia accompanying depression is so severe that the problem is misdiagnosed as a sleep disorder. And chronic insomnia – sleeping problems that continue for the better part of a year – is a strong clinical predictor of depression.

A number of small studies are now investigating the link between depression and insomnia, and early results suggest that curing sleeping problems can double the chances of a complete recovery from depression. According to a study described in the New York Times on November 18, 2013, researchers at Toronto’s Ryerson University found that 87 percent of patients whose insomnia was resolved in four biweekly talk therapy sessions also saw their depression symptoms disappear after eight weeks of treatment. This approach worked for the patients regardless of whether they were assigned to take an antidepressant drug or a placebo pill.

The Toronto study is one of four now underway that are looking at the effects of treating insomnia and depression at the same time. The insomnia connected to depression is much more serious than the occasional sleeping problems most people experience – it is described as at least a month of chronic sleep loss that causes problems at work, at home or in important relationships. Several studies have suggested that developing this kind of troublesome insomnia doubles the risk of becoming depressed. According to the National Sleep Foundation (NSF), "Depression may cause sleep problems and sleep problems may cause or contribute to depressive disorders. For some people, symptoms of depression occur before the onset of sleep problems. For others, sleep problems appear first…Sleep problems are also associated with more severe depressive illness."

The NSF cites evidence suggesting that people with insomnia "have a 10-fold risk of developing depression compared with those who sleep well" and that research suggests that the risk of developing depression is highest among people who have trouble falling asleep and staying asleep rather than among those whose sleep is not refreshing and those who suffer from daytime sleepiness.

The main insomnia treatment under investigation is "cognitive behavior therapy for insomnia," or CBT-I. Patients are taught to establish a regular time to wake up; they are instructed to get out of bed when they’re awake and to avoid eating, reading, or watching television in bed and to eliminate daytime napping. In a pilot study at Stanford University reported in 2008, 60 percent of patients who received seven sessions of the talk therapy in conjunction with an antidepressant fully recovered from their depression, compared with 33 percent who received the same drug plus sleep hygiene therapy, which does not include talk therapy and focuses on such measures as getting regular exercise and avoiding caffeine and too much alcohol in the evening.

We’ll know more about how well the new combined treatment approach for insomnia and depression works after all four studies are published in 2014.