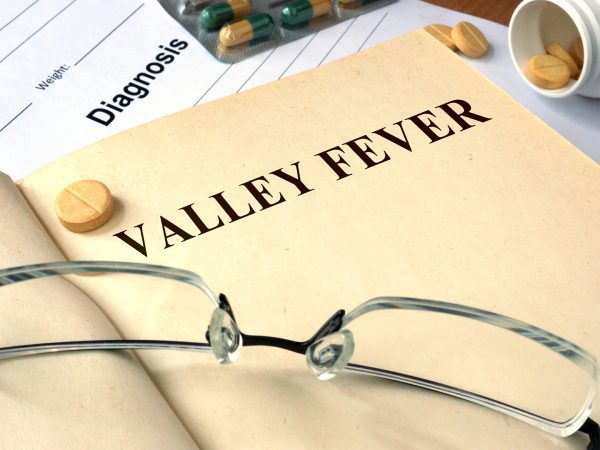 Valley Fever is an infection – usually of the lungs – caused by a fungus, Coccidioides immitis, found in the southwestern United States and northwestern Mexico. It was discovered in the San Joaquin Valley of California and is also sometimes called “San Joaquin Valley fever,” “desert fever,” or “desert rheumatism.”

Valley Fever is very common here in Arizona. We see a lot of infections in June and July and then again in October and November. In California, the “season” for Valley Fever runs from June through November. The fungus lives in the soil, and those most susceptible to infection are farm and construction workers as well as archeologists and others whose jobs involve disturbing the soil and who may inhale the spores.

More than 60 percent of all cases are so mild that those infected never feel sick and never know they have Valley Fever. Those who feel bad enough to go to the doctor usually complain of fatigue, cough, chest pain, fever, rash, headache, and joint aches. Most of the time no specific treatment is needed, just plenty of rest. However, I do suggest eating one or two cloves of raw garlic daily. Garlic has antibiotic and antifungal properties that may make it useful in counteracting fungal infections such as Valley Fever. You can make raw garlic more palatable by chopping it fine and mixing it with food. Or cut a clove into chunks and swallow them whole like pills (remember, a clove is one of the segments of a head or bulb of garlic).

About five percent of cases of Valley Fever lead to pneumonia or other breathing problems that require treatment, typically with Diflucan (fluconazole), a strong prescription antifungal drug. Side effects of this medication can include nausea, vomiting or abdominal pain, diarrhea, headache, or rash. Be sure to tell your physician about any severe or unusual side effects. In rare cases, Diflucan can cause liver damage, and  before taking it women should be sure to tell their doctor if they’re pregnant or think they might be. The drug can damage the fetus although potential benefits may warrant use of the drug in pregnant women despite potential risks. In an even smaller percentage of cases of Valley Fever, the infection becomes generalized and potentially life-threatening, requiring more drastic treatment.

The best way to deal with Valley Fever would be a vaccine to prevent it. Researchers at the Valley Fever Center for Excellence here in Tucson (one of several such centers in the southwest and California) are working on a vaccine. Let’s hope they find one soon.