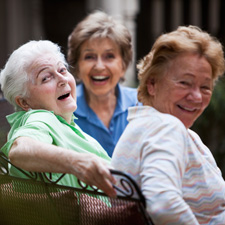 For some years, research has suggested that laughter really is healing. It may boost immunity, relieve pain, lower stress, and even help protect against heart disease. So far, studies haven’t shown whether what helps is the physical act of laughing, the ability to cope in a positive manner with life’s ups and downs, the social bond we form when laughing with others, or a combination of all those factors.

The grandfather of all this research was magazine editor Norman Cousins, who discovered during treatment for ankylosing spondylitis, a painful and disabling autoimmune arthritic disease, that negative thoughts made him feel worse. He decided to explore whether positive emotions would have the opposite effect. He watched funny movies, asked his doctors, friends, and relatives to bring him jokes and tell him about comic incidents, and eventually wrote about his experience in a popular 1979 book, Anatomy of an Illness. Cousins experienced a complete remission of his disease, which he attributed in part to laughter.

Since then, we’ve learned a lot about the healing effect of laughter. One of the latest studies, from Loma Linda University in California, found that humor may help reduce damage to the brain caused by the stress hormone cortisol, which in turn, can improve memory.

The researchers recruited two groups of seniors. Those in one group had diabetes, while those in the other were in good health. They showed both groups a 20-minute funny video and afterwards, gave all the participants a memory test that measured their visual recognition, learning ability and recall. The researchers also asked a third group of seniors to take the memory test even though they hadn’t viewed the video. The cortisol levels of all the participants were measured before and after the experiment.

These results suggest that lowering stress (through laughter, in this case), improved memory. The researchers said that laughter also releases endorphins and dopamine in the brain, and that these neurochemical changes increase gamma wave band frequency, a neural oscillation pattern associated with improved memory.

Another recent study, from cardiologists at the University of Maryland Medical Center in Baltimore, showed that people with heart disease were 40 percent less likely to laugh in a variety of situations compared to people of the same age without heart disease. In a press release accompanying publication of the study, cardiologist Michael Miller, M.D., director of the Center for Preventive Cardiology at the University of Maryland Medical Center, said, "We don’t know yet why laughing protects the heart, but we know that mental stress is associated with impairment of the endothelium, the protective barrier lining our blood vessels. This can cause a series of inflammatory reactions that lead to fat and cholesterol build-up in the coronary arteries and ultimately to a heart attack."

We have lots more to learn about the contribution of laughter to health. But based on what we know now, I would say that for the sake of your health, it pays to laugh. Furthermore, laughing is fun, which is why I’ve always made sure my life includes time for laughter.