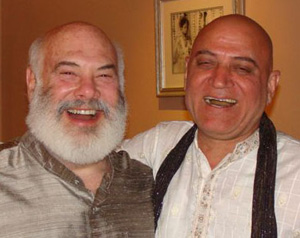 As he celebrates his birthday on June 8, 2014, Dr. Weil reflects on his career as a prankster at Harvard, the therapeutic power of “laughter yoga,” and the relationship between humor and graceful aging.

So, what’s funny about turning 72?
(Laughs) I’d have to say nearly everything. Viewed from a certain perspective, being this age seems ridiculous – I often have the feeling that I have no idea how I got here, and absolutely no ability to see myself as genuinely old. Try as I might, the image just does not fit.

When did your love for comedy begin?
Definitely when I was just a little kid, via radio and the very early days of television. I loved George Burns and Jack Benny. I grew up in a reform Jewish household, and there’s a long tradition of making and appreciating humor in that culture that definitely rubbed off on me. My mother’s philosophy remained unchanged from those days until her death at age 94: “No matter what happens to you in life, never lose your sense of humor.”

And you are a student of laughter, right?
Well, I happened to grow up with a master laugher. My father’s mother Mayme lived with us for a time. After consuming a brandy Alexander as a priming agent at family dinners, she was subject to the most spectacular laughing fits, which could be touched off by the smallest of jokes. It normally took about 10 minutes for the event to play out, leaving her red-faced and in tears, but clearly happier and less stressed. It made the adults present uncomfortable to watch, but as a child I got a tremendous contact high from it. I’m glad to say I seem to have inherited some of her ability to abandon myself to hysterical laughter, and I am hard-pressed to think of anything that makes me feel better than a good laugh.

This is the 50th anniversary of your receiving your undergraduate degree from Harvard. To mark the occasion, the Harvard Crimson newspaper recently wrote about your campus reputation in the early 1960s as a “wizard and trickster.” What do you recall about that time?
I was an editor of the Crimson, and during my senior year also joined the Harvard Lampoon, the humor magazine, which meant I was straddling two very different worlds. I convinced both groups that I was a double-agent for the other side, which led to lots of adventures, such as stealing the ibis – the four-foot, copper bird statue on top of the Lampoon’s roof.

I got to know some very funny people at the Lampoon, including three who went on to become famously funny: Chris Cerf, the author, editor and musician; and Doug Kenney and Henry Beard, who founded the National Lampoon and had a pretty big influence on American comedy in general.

I also had a brief career at Harvard as a letter-writing prankster – I would procure letterhead stationery from powerful people and organizations by various means and send prank letters to self-important people who I thought needed deflating. Fun, but also dicey at times, and I had to give it up.

Do you really believe that laughter can heal?
The older I get, more sure I am that it can. I am a great fan of the work of Dr. Madan Kataria [shown laughing with Dr. Weil], who founded the first Laughter Yoga Club in 1995 – there are now thousands of such clubs worldwide. People gather and begin “fake laughing” – reciting “ha, ha, ha” in unison – and the laughter quickly becomes real, leading to group hysteria that would have made Mayme proud. There have been a few small studies indicating that laughter raises endorphins, leading to better pain tolerance and overall feelings of well-being that last far after the laughing ends.

If laughter yoga doesn’t appeal to you, I would say that virtually anyone can benefit by finding and following his or her personal humorous tastes. Laughing alone is good – it’s certainly better than weeping alone – but laughing in groups is far better. In fact, I’d say a good laugh with friends is one of the most profoundly healing activities I know.

Is there any particular humor you’d like to leave us with?
Well, I’ve loved Lewis Carroll’s “You Are Old, Father William” from Alice’s Adventures in Wonderland since I was a little kid. The first two verses in particular seem to resonate with me these days:

“You are old, Father William,” the young man said,
“And your hair has become very white;
And yet you incessantly stand on your head –
Do you think, at your age, it is right?”

“In my youth,” Father William replied to his son,
“I feared it might injure the brain;
But now that I’m perfectly sure I have none,
Why, I do it again and again.”