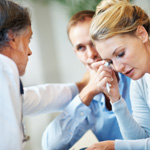 Hysterectomy – the removal of the uterus – is now the second most common surgery among women in the United States (first, is Caesarean section delivery). Every year, some 600,000 women undergo hysterectomy for conditions ranging from uterine fibroids (the most frequent reason) to endometriosis, prolapse of the uterus, pelvic pain, and cancer of the uterus, cervix, or ovaries.

We know that hormones play a role in depression and that women are twice as likely as men to experience depression. In fact, as many as one in four women may suffer a major depressive episode over the course of a lifetime. Before puberty, rates of depression are about equal in boys and girls, suggesting that hormonal influences account for much of the disparity in the adult population. Emotional changes associated with the female menstrual cycle and with menopause are often striking.

Some studies have shown that hysterectomy can increase a woman’s risk for depression, particularly if she has had her ovaries removed during the surgery. If a woman hasn’t reached menopause, removing the ovaries – the main source of estrogen in the female body – brings on instant "surgical menopause," complete with hot flashes and other typical symptoms, including emotional changes. Ovaries are removed in 55 to 80 percent of women who undergo hysterectomy.

The latest study on this subject included 2,000 women who were between the ages of 42 and 52 when enrolled in 1996 and 1997 and were followed for 10 years by researchers from the University of Pittsburgh. Of these women, 1,793 went through menopause naturally, 76 had hysterectomies and 101 had hysterectomies plus removal of their ovaries. All the hysterectomies were "elective," meaning that they were done to relieve pain and improve quality of life; none were done for cancer or other life-threatening disorders.

When they entered the study, all the women were premenopausal and all answered questions designed to measure depression. This test is scored on a scale of 0 to 60; a score of 16 or higher denotes depression. All the women scored about the same when they entered the study, the research team reported. Later, women who went through natural menopause had a mean score of 8.6, a number that fell to 7.8 by the study’s end. Women who had had hysterectomies had a mean score of 9.37 after the surgery, but that score eventually dropped to 9.08; women who had their ovaries removed had a mean score of 10.96 at first, and scored 8.91 by the study’s end. The study was published in May 2012 in the journal Obstetrics & Gynecology.

The findings here suggest that when post-menopausal depression does occur, it doesn’t happen to every woman, and it appears to decline over time. This is good news. However, the study authors noted that their results may not apply to all women, particularly those who have a history of depression.

For a full discussion of depression and an integrative plan for optimum emotional well-being, see my latest book, Spontaneous Happiness, published by Little, Brown & Co. in November 2011.