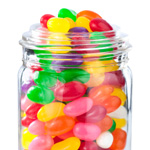 You’re referring to a study from UCLA showing that when a solution of high fructose corn syrup (HFCS) was substituted for the drinking water of rats, the animals had trouble figuring out a complicated maze that they knew how to navigate before the study began. Then, after being given a supplement containing omega-3 fatty acids, the rats in one group were able to negotiate their way through the maze much faster than rats that didn’t get the omega-3. The researchers suggested that long-term diets high in HFCS may alter the brain’s ability to learn and remember information and that adding omega-3s can help minimize the effect.

This study is the first to demonstrate that HFCS can slow the brain and compromise memory and learning. The researchers note that they weren’t focused on fructose that occurs naturally in fruit but on HFCS. HFCS is used to sweeten soft drinks and is found in a wide variety of processed foods, including salad dressings, and ketchup, jams, jellies, ice cream and more. The amount of fructose in HFCS added to foods ranges from 42 percent to 90 percent, much more than regular corn syrup; the Agriculture Department has calculated that the average American consumes more than 40 pounds of HFCS every year. I’m concerned that this highly processed substance has disruptive effects on metabolism, in part because the body doesn’t utilize fructose well, and humans have never before consumed it in such quantity. Aside from its potential problems with thinking and memory, HFCS has well-known adverse effects on other aspects of health. It promotes obesity, metabolic syndrome, and diabetes; disturbs liver function, and elevates serum triglycerides in men.

As for the role of omega-3s in this study, the lead author suggests that we should regard amounts we get from our diets or supplements as reserves for the brain to tap when extra fuel is needed to fight off future challenges. He also notes that DHA (docosahexaenoic acid) protects against damage to synapses (neural junctions) in the brain.

In addition to a decline in synaptic activity, the rats that didn’t get omega-3s developed signs of insulin resistance. The researchers suggest that because insulin can penetrate the blood-brain barrier, it may affect neurons in ways that disrupt learning and cause memory loss. They also say that too much fructose in the diet could interfere with insulin’s ability to regulate how cells use and store sugar, and impede production of the energy required for processing thoughts and emotions. The results of this intriguing study suggest that regular consumption of omega-3s can protect the brain against fructose’s harmful effects. Bear in mind, however, that the study was done in rats, not humans. It was published in the May 15, 2012 issue of the Journal of Physiology.

I have long urged cutting back on foods to which any sweeteners have been added. All of them contribute to the obesity epidemic that is threatening the health of so many Americans. But HFCS is the worst, different from and possibly more dangerous than ordinary corn syrup.

As for omega-3s, most Americans don’t get enough of them in their diets, and as a result are more likely to develop cardiovascular disease, cancer, inflammatory disorders, and mental and emotional problems. Here’s where you’ll find a list of the best food sources of omega-3s. I also recommend that everyone take two to four grams daily of a fish oil supplement.