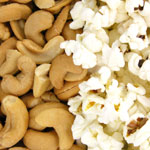 In diverticulitis, small pouches (diverticula) that develop in the wall of the colon become inflamed or infected. (The presence of diverticula is called "diverticulosis" and usually is not accompanied by any symptoms.) The major symptom of diverticulitis is lower abdominal pain, but cramping or constipation can also occur. Because I typically don’t observe diverticulitis in people who eat wholesome diets, exercise regularly, and don’t allow stress to affect their digestive systems, I view it as a disease associated with a less-than-healthy lifestyle. It is rare in countries where diets are high in fiber.

For many years, conventional medical wisdom held that eating nuts, popcorn and foods with very small seeds (such as tomatoes) could worsen the symptoms of diverticulitis. No scientific studies had demonstrated that this was so, but the thinking was that indigestible residues from these foods could get stuck in diverticula and cause trouble.

The researchers followed more than 47,000 participants in the Harvard School of Public Health study of male health professionals. At enrollment, the men were between the ages of 40 and 75 and had no history of diverticulosis. Every four years, they completed a questionnaire listing the foods they ate and reported on their health. During 18 years of follow up, 801 men developed diverticulitis; 383 reported diverticular bleeding. However, the investigators found that men who ate nuts at least twice a week had a 20 percent lower risk of diverticulitis than men who ate nuts less than once a month; men who ate popcorn at least twice a week, had a 28 percent lower risk. The investigators found no association between diverticulitis and eating corn and no link between diverticular bleeding and eating nuts, corn or popcorn.

If you’ve been avoiding these foods because of diverticulosis or diverticulitis, I suggest introducing them into your diet gradually to see how they affect you and how much of them you can tolerate – you should know fairly quickly. There’s no hard and fast rule here. It all depends on how you feel.