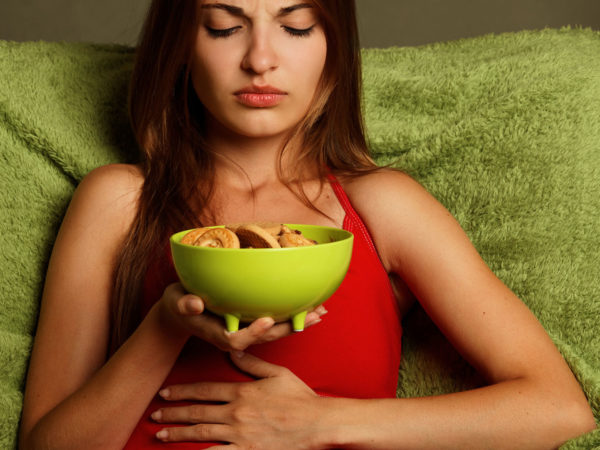 The bloating you experience after eating could mean a number of things ranging from gas to lactose intolerance or even overeating, so I consulted an expert, Gerard Mullin, M.D., an integrative gastroenterologist at Johns Hopkins Medical Center in Baltimore. He told me that bloating and distension after eating can result from unbalanced overgrowth of bacteria in the small bowel. Dr. Mullin also said that bacterial fermentation of food produces gas that can increase waist size several inches after a meal.

This condition, known as SIBO (small intestinal bacterial overgrowth), occurs when there are a lot more bacteria than normal in the small intestine, especially when the excess bacteria are more like those that are normally found in the colon (aka the large intestine). The colon contains more than one billion bacteria per milliliter of fluid, compared to fewer than 10,000 bacteria per milliliter of fluid in the small intestine. Symptoms of SIBO include the bloating and distension you describe, plus flatulence, diarrhea, and abdominal pain.

Fortunately, this condition can be easily diagnosed with a test called the lactulose hydrogen breath test. Before testing, you have to fast for 12 hours. At the start, you blow up a balloon with a single breath of air. Then you eat a small amount of lactulose or glucose (sugars) and blow periodically into a balloon every 15 minutes for three hours or more. Although there are some limitations to this test, in all likelihood it can tell you whether your symptoms are due to SIBO. If so, the treatment is antibiotics in conjunction with specific probiotics for a week or two.

Dr. Mullin suggests consulting a physician who is aware of the connection between your symptoms and SIBO.