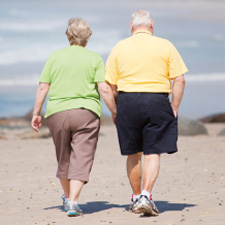 Clearly, obesity is a widespread medical problem in the U.S. – one third of adults and 17 percent of children are considered obese, and, as a result, at increased risk of heart disease, diabetes, stroke, high blood pressure, high cholesterol, and kidney and gallbladder disease. Obesity may also increase the risk for developing some types of cancer. And it is strongly associated with osteoarthritis and sleep apnea.

For the record, on June 18, 2013, delegates to the annual meeting of the American Medical Association (AMA) voted to officially recognize obesity as a disease. How this decision is going to affect doctors and patients remains to be seen. Some proponents of the move say that it could lead to reimbursement for physicians so that they can take the time to talk to their patients about the dangers of obesity and advise them on weight loss strategies. I’ve seen an estimate that the frequency with which primary care physicians discuss weight-related issues with patients ranges from 17 to 25 percent, suggesting that too many doctors aren’t dealing with them.

Supporters of the AMA action suggested that it could help decrease the stigma of obesity, which might not be just a matter of inactivity and overeating.

Some people (including me) disagree with the AMA’s action. The vote to classify obesity as a disease went against a recommendation of the organization’s Council on Science and Public Health, which studied the issue for a year and decided that obesity shouldn’t be considered a disease because the measure most often used to define it – the body mass index (BMI) – is unreliable. The BMI, a rough measure of body fat based on height and weight, has been around for about 200 years and has long been criticized as inadequate because it doesn’t tell us the ratio of body fat to lean muscle mass. A recent study concluded that relying on BMI has led us to underestimate the number of people who are obese. The researchers found that, compared to a test that indicates the true ratio of body fat to lean muscle mass, BMI can misclassify women age 50 and older as healthy, when in fact they may be dangerously overweight. The investigators also found that men who might be classified as obese on the basis of their BMI may actually be at a normal, healthy weight. The example often used to show what’s wrong with the BMI is that of a muscular football player whose height/weight ratio exceeds the BMI for a normal, healthy weight when in fact his "fat" is muscle.

I do not consider obesity a disease. Rather, I see it as a condition that may increase risk of certain diseases. But it is possible to be obese and healthy – if one eats a balanced diet, gets regular physical activity, attends to other aspects of lifestyle that influence health, and makes use of appropriate preventive medical services.