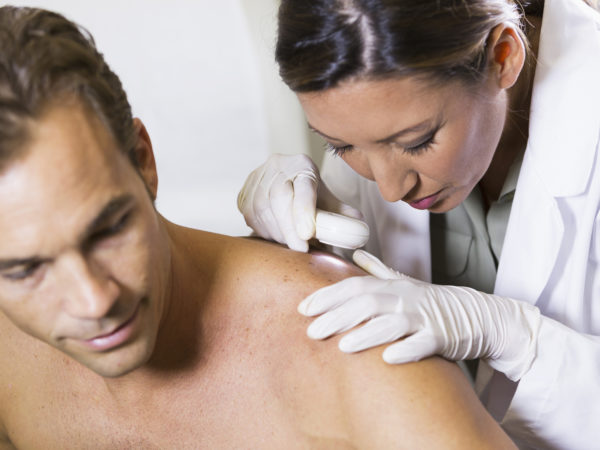 New research from the UK suggests that women who have more than seven moles on their right arm are more likely to have 50 or more moles on their entire body. If there are more than 11 moles on the arm, the study suggests, you’re likely to find more than 100 moles on your body. The more moles you have, the greater your risk of melanoma, the most serious and potentially deadly form of skin cancer. Researchers at Kings College, London conducted the study with an eye towards helping doctors assess their patients’ risk of the disease.

The investigators gathered and reviewed information from more than 3,694 twins, all healthy white women. (Melanoma occurs 20 times more often in whites than in African-Americans.) They assessed hair and eye color, freckles, skin exams and mole counts on 17 body sites as well as the count for the entire body. Then, they analyzed the same data points gathered from 400 melanoma patients before concluding that the number of moles on the right arm was the best indicator of the total number of moles on the body.

For the study, the researchers defined moles as pigmented raised tissue at least 0.07 inches (more than two millimeters) in diameter. Moles are composed of melanocytes that produce the pigment melanin. Don’t mistake moles for freckles, which are flat, usually pale brown in color, and come and go with sun exposure.

While most moles are harmless, be alert for those that grow, or change shape, color or texture. And while the moles on your arm may indicate the total number of moles on your body, melanoma can develop anywhere on the skin, most commonly on women’s legs and men’s trunks.

Melanoma occurs most frequently in individuals with fair skin, blue or green eyes, and red or blond hair. In addition to many moles, risk factors include a family history of melanoma, development of precancerous growths called dysplastic nevi, as well as obvious freckling on the upper back and shoulders, three or more blistering sunburns prior to the age of 20, and exposure to high levels of intense sunlight, particularly during childhood. Exposure to ultraviolet radiation in tanning salons also appears to increase risk, as does the combined use of UVA light with psoralen (PUVA) for the treatment of psoriasis.

To protect yourself, the Skin Cancer Foundation recommends getting a yearly skin exam by a doctor and checking your own skin monthly for any suspicious changes.