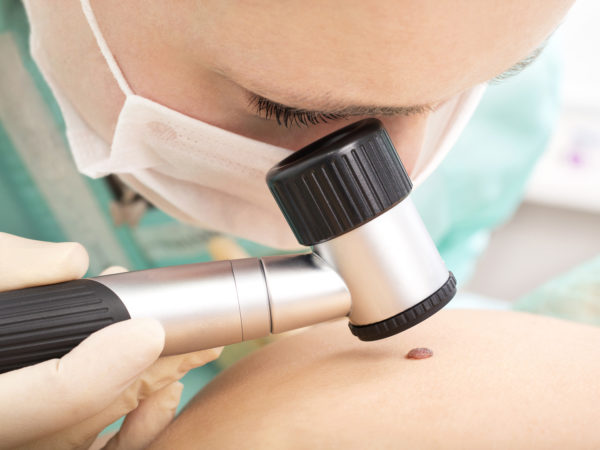 What is melanoma?
Melanoma is the most serious and potentially dangerous form of skin cancer. It is the leading cause of death from skin diseases and often spreads deep into the skin as well as metastasizing rapidly to other tissues. It arises from melanocytes, which are cells found in skin, the iris of the eye, and hair that produce pigment and determine color. The rate of skin cancer, including melanoma, has been dramatically on the rise. Although the risk of developing melanoma increases with age and length of sun-exposure, it can also affect young, healthy individuals. Melanoma is now the most frequently diagnosed cancer and the leading cause of death in American women between the ages of 25 and 29, and is the second most frequently diagnosed cancer (after breast cancer) among women between 30 and 34.

What are the signs and symptoms of melanoma?
The primary sign of melanoma is the appearance of an abnormal growth occurring in a pigmented area of skin. Any change in the size, shape, color or texture of an existing skin lesion, may also signal an impending melanoma, as well as if it oozes, crusts or bleeds. Pain, poor- healing, swelling or chronic itching of these growths can also be a sign of malignant change. Melanomas may grow within a mole or birthmark, but often appear on unmarked skin. Although these cancers are typically found on sun-exposed areas, such as the upper back and trunk and on a woman’s legs, they can also appear on other parts of the body, including palms, soles, and under the nails, or in areas that rarely see the sun. Although uncommon, Melanoma may occur in the eye, the digestive tract, lymph nodes, or other areas where melanocytes are found. Symptoms here are often difficult to detect until late in the stage of growth.

What are the causes?
Malignant transformation of melanocytes primarily occurs as a result of DNA damage from ultraviolet (UV) light. This explains the relationship between melanoma and the length of sun exposure, and how the chances of developing it increase with age. Melanoma is most common among people with fair skin, blue or green eyes, and red or blond hair. Risk factors include a family history of melanoma, the presence of many moles (nevi) or birthmarks and development of precancerous lesions (dysplastic nevi), as well as having obvious freckling on the upper back and shoulders, three or more blistering sunburns prior to the age of 20, and experiencing high levels of intense sunlight. There seems to be a direct correlation between the development of melanoma and intense sun exposure as a child. In addition, tanning salons expose the body to UV radiation and appear to pose an increased risk of melanoma, as does the combined use of UVA light with psoralen (PUVA) for the treatment of psoriasis.

What is the conventional treatment?
Melanoma can be cured surgically if it is diagnosed and treated early when the tumor is thin and has not deeply invaded the skin. However, if a melanoma is not removed during this time, cancer cells may continue dividing under the skin’s surface and invade healthy tissue.  Unlike basal cell and squamous cell carcinoma, malignant melanocytes tend to grow downward rather than horizontally. When a melanoma becomes thick and deep, the disease often invades the lymphatic system where it can spread to other parts of the body and be difficult to control.

Following diagnosis, cancerous skin cells and a portion of the normal surrounding skin usually have to be surgically removed. A biopsy of neighboring lymph nodes may also be required to look for spread of malignant melanocytes to the lymphatic system. If affected, these lymph nodes generally require surgical removal as well.  Skin grafts may be needed after surgery depending on the location and how much skin is removed. Only the smallest and most shallow melanomas can be cured without further intervention. If the skin cancer is deeper than four mm or lymph nodes are affected, radiation and chemotherapy, along with immunotherapy (use of medications that stimulate the immune system, such as interferon) are indicated and these therapies may improve overall chance for cure. For example, studies have suggested that interferon can improve cure rates by approximately 10 percent. However, interferon has many side effects and is oftentimes difficult to tolerate.

For patients with melanoma that has spread beyond the skin and lymph nodes to other organs, treatment is more difficult. At this point, melanoma is usually not curable. Treatment is usually directed at shrinking the tumors and resolving symptoms. Both chemotherapy and the use of interferon or interleukin may be tried. People who have had melanoma carry a high risk of developing a new melanoma. Those at risk for any reason should have frequent, routine check-ups and monitor their skin regularly.

What therapies does Dr. Weil recommend for melanoma?
The best integrative approach to melanoma is prevention and early detection. To protect yourself against skin cancer, the Skin Cancer Foundation advocates having a yearly skin exam by a doctor and checking your own skin once a month for any changes that could indicate cancer. Look everywhere on your body for any changes – your head and face (use mirrors) and even your scalp (use a blow-dryer to separate your hair). Also check your hands and fingernails, elbows, arms and underarms, your neck, chest and torso. Women should look under their breasts. Use a hand mirror to check the back of your neck, shoulders, upper arms, back, buttocks and legs and then sit down and check your legs and feet, including the soles, heels and nails. Also use a hand mirror to examine your genitals and search through areas of pubic hair. Be suspicious of:

Using sunscreen is one of the best ways to protect against all forms of skin cancer. It’s a good idea to apply sunscreen before going out in the sun, especially between 10 a.m. and 3 p.m. daylight savings time from April to September, when the sun’s rays are the most damaging. Use at least one ounce (enough to fill a shot glass) to completely cover exposed areas of your body. Take special precautions on beaches, near reflective bodies of water, at high altitudes, and low latitudes. You’ll get added protection by wearing a wide-brim hat, protective clothing and sunglasses (make sure they block at least 99 percent of UVA and UVB radiation). Recent studies suggest that regularly supplementing with mixed carotenes and vitamin E in the form of mixed tocopherols and tocotrienols can help against sunburn. Taking a regular multivitamin-mineral supplement with these and other antioxidants including 2,000 IU of vitamin D3 is part of a daily regimen that Dr. Weil recommends.

Finally, Dr. Weil emphasizes finding a balance between protecting oneself against the harmful effects of the sun while trying to take advantage of the positive effects sunlight has on health. He frequently cites the advice of Michael Holick, M.D., Ph.D., an expert on vitamin D and author of The UV Advantage (iBooks, 2003). Dr. Holick recommends spending at least a half-hour every day in the sun before applying sunscreen.

Daily exposure to bright sunlight during the summer – even for 10-20 minutes – is the best way for the body to make vitamin D. Research has shown that most of us are woefully deficient in vitamin D, and more to the point, that adequate levels not only stabilize bone and muscle health, but also boost immunity, help reduce chronic pain and protect us from several forms of cancer. Time in the sun optimizes cyclic secretion of melatonin in the brain, the neurotransmitter that controls biorhythms and influences immunity, sleep, and hormonal function. It also boosts mood and helps prevent depression.