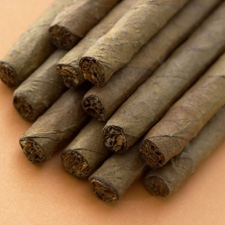 Bidis (pronounced "bee-dees") from India and elsewhere in Southeast Asia are small, thin hand-rolled in the leaves of tendu or temburni plants native to Asia. Some are flavored with chocolate, cherry or mango. Clove-flavored cigarettes called kreteks (pronounced "cree-techs") from Indonesia contain tobacco, cloves and other additives. However, since September 2009, the sale of flavored cigarettes has been banned in the U.S. under the Family Smoking Prevention and Tobacco Control Act.

Unfortunately, tobacco companies have responded to the 2009 law by making flavored small cigars, also called "little cigars," about the size of cigarettes or slightly longer. These products resemble cigarettes except for being wrapped in brown paper containing some tobacco leaf. Some have filters. Little cigars are sold in packs of 20 and are often smoked as if they were cigarettes. Unlike flavored cigarettes, "little cigars" are not regulated by the FDA.

Because little cigars are not taxed like cigarettes, they are much less expensive, a major factor in their appeal to teenagers. According to the Government Accountability Office, unequal tax rates on tobacco products have led to "significant market shifts," with cost-conscious smokers switching to lower-priced products instead of quitting. What’s more, some tobacco companies have resorted to extraordinary measures to keep the tax rates low. In March 2013, Bloomberg News reported that one brand of "heavy weight" cigars (that look like cigarettes but weigh enough to be taxed as cigars) has a filter containing sepiolite, a clay material used in kitty litter, waste treatment and industrial cleaners. According to the Bloomberg News report, the heavier cigars have enabled manufacturers to avoid more than a $1 billion in taxes since federal tobacco taxes were increased in 2009. Data from the 2011 National Youth Tobacco Survey suggest that more than four in 10 smokers in middle school and high school smoke flavored little cigars and cigarettes.

Both bidis and kreteks have considerably higher concentrations of nicotine, tar and carbon monoxide than traditional cigarettes. On its website, the American Cancer Society (ACS) reports a Health Canada estimate that filtered little cigars contain about the same amount of nicotine as a regular cigarette. If these products are smoked and inhaled like cigarettes, they would be expected to deliver a similar amount of nicotine, but this has not been fully tested, according to the ACS.

No studies of the health effects of either bidis or kreteks have been done in the United States, but studies from India indicate that smoking bidis is associated with increased risks of lung cancer, oral cancer and cancers of the esophagus and stomach. Indian studies also have found more than three times the normal risk of heart disease and heart attack and nearly four times the normal risk of chronic bronchitis among bidis smokers. And, according to the U.S. Centers for Disease Control and Prevention (CDC), data from Indonesia suggest regular smoking of kretek cigarettes increases the risk of abnormal lung function 13-20 times compared with nonsmokers.

Bottom line: flavored cigarettes or "little cigars" are not safer than regular cigarettes and cigars, and smoking tobacco in any form is dangerous.