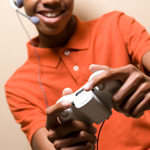 We really don’t know much about the long term effects of playing violent video games, but a new study from the Indiana University School of Medicine suggests that it can lead to decreased activity in brain areas that control emotions and aggressive behavior. So far, we don’t know whether the changes seen are temporary or permanent or how they might affect behavior.

For the study the investigators recruited 22 healthy young men between the ages of 18 and 29, all of whom said they played violent video games less than one hour per week. The volunteers were divided randomly into two groups. One group was assigned to play a violent video game for about 10 hours at home for one week. After that, they were told not to play any such games at all for a week. The men in the other group were told not to play them for the entire two-week study period.

Before the study began, all the volunteers underwent functional MRIs (fMRI) to give the researchers a baseline look at their brains. The fMRIs were repeated after the first week and again after the second week to see if any changes took place.

The brain changes described in the study showed up after the first week in the men who played the violent games. After the next fMRI, the investigators reported that those changes were reduced. Further research will be needed to find out what the changes mean.

While the Indiana University findings are considered preliminary, earlier research has indicated that excessive time spent playing violent video games can lead to poor social skills, lower grades in school and less reading and exercising, weight gain, aggressive thoughts and behaviors and less interest in spending time with the family and on schoolwork. According to the American Academy of Child & Adolescent Psychiatry, studies of children exposed to violence have shown that they can become desensitized to it and may tend to imitate it. With greater exposure to violence they show more aggressive behavior.

Studies cited by the Academy also show that the more realistic and repeated the exposure to violence, the greater the impact it has on children, particularly those with emotional, behavioral and learning problems. If your son is preoccupied with violent video games, you can try setting some limits on the amount of time he spends on them and guide him toward other activities. If you’re worried about the effect the games may be having on his behavior, your best bet is a consultation with a mental health professional who has experience in these matters.

Still, there is no reason to abandon video games entirely. The new, nonviolent games that require whole-body movement are both fun and healthy. Find out more at Get Moving with Video Games.