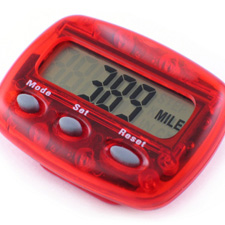 Personal tracking devices designed to measure how much you move, how many steps you’ve taken per day and the amount of time you’re inactive at your desk or on your couch are proving immensely popular. Reportedly, 2013 retail sales in this category came to about $290 million, and one forecast I saw estimates that sales of these kinds of gadgets will reach $6 billion by 2018.

You can now get a tracker to wear as a watch or one that you clip to your shoes, socks, belt or bra or otherwise attach to your clothing. The key questions raised by the use of these devices are 1) whether they actually motivate you to be more active and 2) how accurate an accounting of your movements they provide. A New York Times reporter (who wore multiple trackers while researching an article on the devices) wrote that his trackers didn’t pick up the fact that as he wrote his article he was tapping his feet to music. And only two of the trackers he wore while riding his bike picked up his pedaling, although all of them kicked in when he was playing tennis. A colleague in New York complains that the tracker she wore when climbing the 31 flights of stairs in her high-rise apartment building recorded only 12.

Research presented at the 2013 meeting of the American College of Sports Medicine showed that trackers were good at measuring the number of steps study participants took while walking or jogging, but Glenn Gaesser, Ph.D., director of the Healthy Lifestyles Research Center at Arizona State University who directed one of the studies, told the Times that trackers were developed "using activities easy to measure, such as brisk waking or jogging …(but they) do not detect light-intensity activities very well."

The primary issue is how well trackers motivate people to become more active. I found less than two dozen studies on the question in a search of the medical literature. According to the New York Times, a study in Boston showed that about 10 percent of participants given trackers were motivated to be more active when they began using the devices; another 20 to 30 percent needed encouragement beyond the feedback they received from their trackers to become more active, but most of the participants didn’t understand the data. To become more active they needed the human element – working out with a friend, joining a team or a challenge at work – to change their behavior.

Activity trackers are probably here to stay, and I assume they’ll get more sophisticated over time. They’re certainly worthwhile if they actually inspire you to become more active. But for many people, teaming up with one or more human beings, rather than an electronic device, remains the best way to boost motivation to exercise.