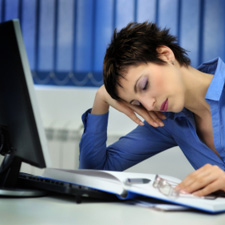 I wasn’t familiar with the term TechnoStress (apparently coined by the authors of a 1997 book, TechnoStress: Coping with Technology @Work @Home @Play), but I certainly identify with the potential problems caused by being connected 24/7. In my book Spontaneous Happiness, I wrote about the mental and emotional effects of information overload, the deluge of email, and the expectation of being reachable just about any time, anywhere thanks to computers and cell phones.

One of the most stressful aspects of 21st century life is the constant intrusion of news media competing for our attention with content designed to induce excitement and anxiety. More and more people I know feel overwhelmed by this. On this website and in my 8-Week Program for Optimum Health, I’ve recommended "news fasting" – excluding news in any form for one day a week and working up to total abstinence for an entire week. Most people who try this report decreased anxiety and increased happiness as a result. I no longer read newspapers or newsmagazines. I listen sporadically to NPR, and occasionally scan headlines on my computer screen. I don’t worry about being uninformed: if something really important happens, someone will tell me about it.

The Information Age – the revolution in collecting and disseminating information made possible by computers, the internet, email, mobile phones, and digital media – is the main force now shaping the evolution of human society. Unfortunately, a great deal of the information is irrelevant or suspect, and the sheer amount of it is drowning us. We’ve seen an explosion in irrelevant, unclear, and simply erroneous data fragments. This overabundance of low quality information has been called "data smog." The inability to process this excessive information can make people feel less in control of their lives. That feeling and an associated sense of helplessness are strongly correlated with both depression and anxiety.

While I do find the new technologies of communication and information convenient and useful, I also blame them for making me feel as if I never have enough time to catch up. Often, I am overwhelmed by all the emails I have to answer and calls and messages to return. I find that I don’t have – or take – time to read as much as I once did and that I must force myself to stop thinking about communications and data processing when I go to bed if I am to get restorative sleep.

I’m also afraid that the Information Age might just as well be termed the Age of Social Isolation. We spend more and more time interacting with other people virtually or not interacting with them at all. Social isolation undermines emotional well-being and predisposes us to depression. You must be proactive to avoid it. I have learned that the hard way. I’ve had to break the habit of surfing the web for hour after hour. Finding my peace with email is still a challenge, as it has become my preferred way of communicating and keeping in touch with friends and associates. My solution: when I leave my office for the day, usually in the mid-afternoon, I leave email, internet, and cell phone behind until the next morning. I recommend that you make similar rules for yourself.