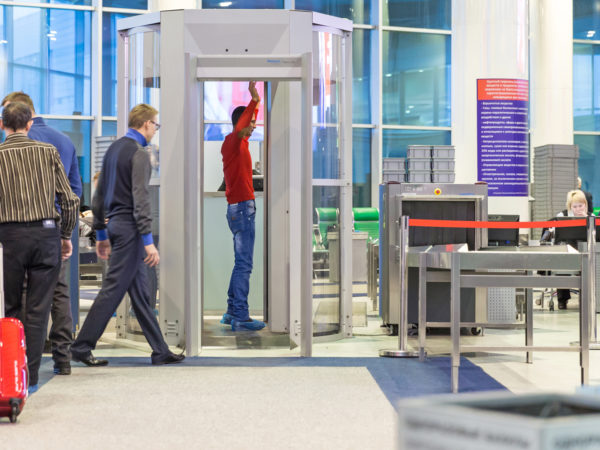 It’s true that cumulative exposure to radiation can lead to cancer – that’s one of the reasons I oppose full body CT scans of healthy people to look for disease, and overuse of X-rays in medical and dental practices. But as I understand it, the full body scanners that have been tested at some U.S. airports to enhance security screening emit far less radiation than medical scans. I’ve read that a single security scanning gives an individual less than 10 microrems. You’ve got to compare that to other sources of radiation we are all exposed to in daily life. For example, simply traveling by air exposes all of us to about 300 microrems per hour of flight. And in the course of a normal day, the average person is exposed to about 1,000 microrems from all sources.

The 10 microrems said to be involved in a single full-body security screening scan probably won’t add up to significant exposure unless you fly all the time (assuming that figure is correct – it comes from the manufacturer of the devices now in use). You also should bear in mind that the cumulative amount of radiation you would be exposed to from 30 hours of airplane travel at high altitude equals the amount generated by a single chest X-ray.

You can, of course, decline a full body scan if you happen to be traveling through one of the airports in the U.S. that uses the technology. However, if you do, you’re likely to be patted down by security guards, an alternative that reportedly has not proved popular among travelers.

The privacy objections you mentioned in your question have gotten far more attention in news coverage of full body scans than the radiation concerns. Here, the notion that an image of your nude body could end up on the Internet seems to be fueling objections. The Transportation and Securities Administration (TSA) says that faces are blurred and that images are immediately deleted. In addition, one protocol proposed would have the images being viewed in another room, so that the airport personnel wouldn’t be directly seeing the body of a passenger in front of them.The sad fact is that flying has become increasingly inconvenient and intrusive.

Most people grumble but put up with the indignities involved – taking off shoes, unpacking computers and marching through metal detectors – in hopes that these nuisances will protect their flights from terrorists. Clearly, the Nigerian who tried to bomb his flight from Amsterdam to Detroit on December 25, 2009 slipped through the net, illuminating flaws in the present system.