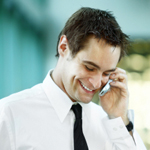 First, a bit of background for those who may not know about the study and its interesting findings. Researchers at the National Institute of Health published a study in the February 23, 2011 issue of the Journal of the American Medical Association showing that cell phone use can speed brain activity in the area nearest the antenna. This finding is regarded as preliminary, and the researchers emphasized that their study didn’t show whether the increased brain activity has any negative – or positive – effect on health.

The study involved 47 volunteers, who each underwent two 50-minute PET (positron emission tomography) scans, a non-invasive procedure that measures glucose metabolism in the brain, a sign of brain activity. During one of the two scans the phone was turned off, but during the other, it was activated to receive a message (with the sound turned off to rule out any auditory stimulation). The scans showed a 7 percent increase in activity in the part of the brain closest to the antenna of the phone that was turned on.

The good news here is that this was a first-rate study done by highly respected researchers. It also suggests a new area of research to learn if the increase in brain glucose metabolism seen could be harmful. (It is also possible that the brain activity could be beneficial.)

One concern is that the increase in brain glucose metabolism could create more free radicals, electronically unstable atoms or molecules that can be harmful to health at the cellular level. Another theory holds that it might trigger a harmful inflammatory response.

For some time, I have recommended the use of a headset when speaking on a cell phone. The same advice was given by Dr. Nora D. Volkow, director of the National Institute on Drug Abuse and primary investigator in the study. This simple precaution can reduce possible ill-effects of cell phone use. If the headphone is inconvenient, use "speaker" mode and hold the phone away from your head. I also advise keeping cell phones away from your body when possible  and saving long conversations for conventional phones.