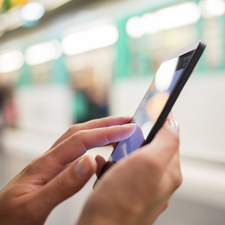 There’s something to it.

Many of us have become so dependent on smartphones, tablets, laptops and other electronic devices that we even sleep with them. A poll conducted in 2012 found that almost one in three Americans who use the internet own a tablet and that two in three report taking it to bed with them.

One problem is that the blue light these devices emit can suppress production of the sleep regulating hormone melatonin, promoting insomnia. This effect is more pronounced than exposure to the light from a television screen in the bedroom because we hold smartphones and other electronic devices close to our faces, intensifying the light exposure. Leaving these devices on at night while you sleep can add to the problem. Researchers at the Lighting Research Center at Rensselaer Polytechnic Institute in Troy, NY have shown that eyes can detect blue light even through closed eyelids, and suppress melatonin production.

Blue light at night has a bigger impact on kids than adults. According to a 2014 National Sleep Foundation (NSF) poll, three out of four kids between the ages of six and 17 have at least one electronic device in the bedroom. Pre-teens who leave their phones or iPads on all night get about an hour less sleep on school nights than other kids and, according to the parents polled, don’t sleep as well as they should. The poll also showed that teenagers who leave their phones or other devices on all night in the bedroom average a half an hour’s less sleep than teens who turn their phones off. In adolescents, melatonin suppression occurs as a result of one-tenth of the exposure to blue light required to suppress it in adults.

Apart from insomnia linked to blue light, some research suggests that exposure may increase the risk of retinal damage and, possibly, age-related macular degeneration, the leading cause of blindness in those over age 55. Blue light may also be linked to cataract formation, although this has not been proved.

I’ve read that some manufacturers are looking into solutions for the blue light problem and the effect it has on sleep. In the meantime, I understand there’s a free program called f.lux you can download to mute blue light at night and restore it in the morning.

Better yet, given the extent of sleep deprivation nationwide, I suggest simply turning off your devices at bedtime, and charging your smartphones, laptops and iPads overnight somewhere other than the bedroom.