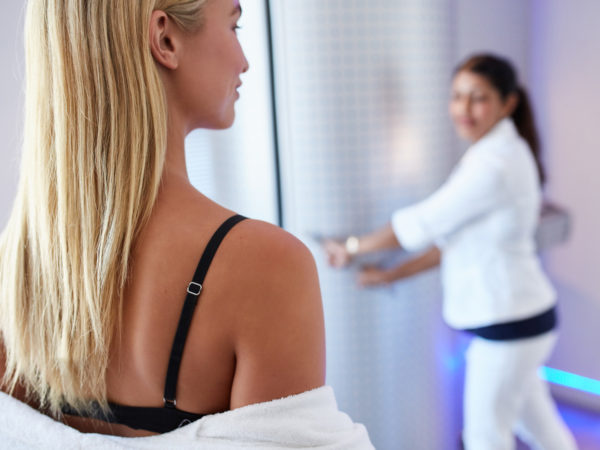 The widely publicized death of Chelsea Ake-Salvacion, age 24, in a cryotherapy chamber in Henderson, NV has raised many questions about the safety of this relatively new and largely unregulated practice. This latest spin on the ice baths athletes have used for years in attempts to shorten recovery time from strenuous exercise hasn’t been well studied. At this writing, Ms. Ake-Salvacion’s death is still being investigated. No one knows what happened after she entered the frigid chamber alone after the close of business on October 19 (2015). A colleague found her frozen body the next morning. Ms. Ake-Salvacion’s co-workers have been quoted in news reports as saying they weren’t in the habit of entering the cryotherapy chamber alone, but reportedly she texted her boyfriend saying she intended to do so to ease soreness from an earlier workout.

Whole-body cryotherapy is meant to be endured for only two or three minutes. It’s dangerous to stay in much longer, with temperatures that can go as low as minus 300 degrees Fahrenheit. At those temperatures, seemingly small mistakes can be catastrophic. A Texas woman has filed suit against a Dallas center charging that she suffered third-degree burns on her left arm with consequent loss of use and disfigurement as a result of a cryotherapy session. She claims she was given wet gloves to wear into the chamber.

And track star Justin Gatlin developed frostbite on his feet as a result of entering a cryotherapy chamber wearing damp socks, which instantly froze to his skin.

Cryotherapy is no longer promoted solely for the relief of muscle soreness. It is also offered as a spa treatment for toning the skin as well as for invigorating the mind, improving sleep, helping reduce cellulite, managing chronic pain, reducing stress and anxiety, preventing osteoporosis, treating asthma and boosting libido. I have seen no reliable evidence that cryotherapy provides these benefits. In fact, it’s questionable if whole-body cryotherapy even works as advertised for muscle soreness. A scientific review published in September (2015) found insufficient evidence from studies of the practice to show that it reduces muscle soreness or improves recovery after exercise compared with rest in active young adult men. The reviewers found no evidence on the use of cryotherapy in women or elite athletes and called for more research, including detailed reporting of adverse events.

It seems unwise that in the U.S. cryotherapy centers are unregulated at both the state and federal level.

If you’re considering cryotherapy, you should be aware of the contraindications listed by cryotherapy centers themselves. These include untreated high blood pressure, skin infections, diabetes, pregnancy, seizure disorders, and heart problems.

Professional athletes, elite runners and others who participate in competitive sports usually are in superlative shape and may benefit from occasional ice baths or cryotherapy. If you’re not part of that crowd, I urge you to be wary of either practice until we have more and better evidence of the benefits and risks, and can be assured of some regulatory oversight of cryotherapy centers.