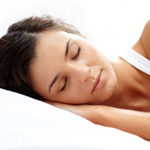 The warning you see on your CD probably applies to binaural beat therapy. Binaural beats are different sound signals delivered to each ear via headphones. Your brain meshes the two sounds into a single tone. This effect was discovered in 1839 by Heinrich Wilhelm Dove, a Prussian physicist and meteorologist who coined the term "binaural beats."

Over the years binaural beat therapy has been used to study hearing and sleep cycles, to treat anxiety, to induce various brain wave states and to promote relaxation and sleep. (Monaural beats are already combined and don’t require headphone use.)

Most people have no trouble with binaural beat therapy. However, there’s at least a theoretical chance of running into trouble if you have epilepsy or an irregular heartbeat (especially if you have a pacemaker).

I discussed this interesting issue with Joshua Leeds, a sound researcher and the music producer I worked with on my CD Sound Body, Sound Mind: Music for Healing, which features music designed to influence brain wave activity and encourage the body’s natural potential for healing. Mr. Leeds says that he has been told that in very rare instances someone with a tendency toward seizures could trigger an episode while listening to binary beats. However, he tells me that in the 25 years he has worked in the field, he has never heard of a single case of that sort. Still, most practitioners caution individuals with seizure disorders to check with their doctors before trying binaural therapy.

As for cardiac issues, the concern is that, just as brainwave patterns are altered by binary beats, heart rhythm may be affected as well.

Labels on some binaural beat therapy products also warn against operating complex machinery while listening. This is because the relaxation induced isn’t compatible with driving or using other machines that require your full attention. Joshua Leeds tells me that the standard disclaimer on some of his products also contains this language: "In the unlikely event that you experience any unusual physical or mental discomfort, immediately discontinue use."

Adverse events when using binaural beat therapy appear to be extremely rare, but in our litigious times, it’s not surprising that manufacturers seek to protect themselves with such warnings. If you don’t have epilepsy or heart problems there’s probably no need for you to formally consult your physician before playing it, and please don’t drive while listening to your sleep therapy CD.