The Flood, Part One 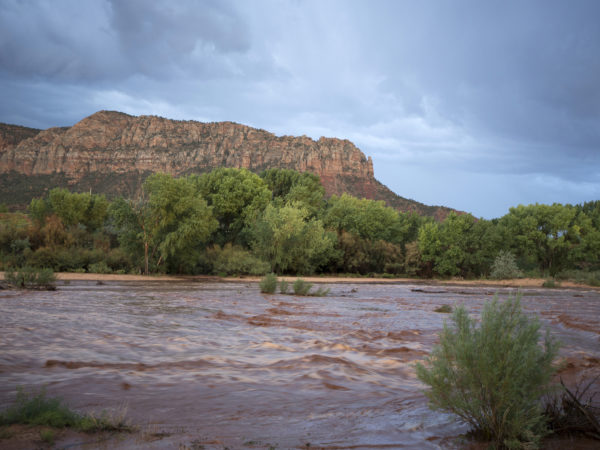 “The office is flooding,” said my brother, Justin. Right. Whatever. I rolled over, trying to get back to sleep. “Jace! The office is flooding!” I jumped up in my underwear and slapped the light switch. Cold, brown, debris-laden water gushed through the door. For some reason, I started to laugh; I guess because it just seemed so crazy.

The first six months of 2006 had been among the driest in local history. Since I am the gardener here at Dr. Weil’s ranch – a 120-acre complex near Tucson, Arizona, that includes his home, three offices and multiple outbuildings – it seemed that the drought came up in every conversation. And monsoon season, which typically runs from July to early September, had started with a whimper. We were far shy of our average twelve inches of annual rainfall by the time it had really started to rain three days earlier.

So I had imagined that this last-minute downpour was all being sucked up by the thirsty landscape. But as it turned out, a vast amount of water had dammed up behind debris, mud and rock somewhere high in the Rincon Mountains that surround Dr. Weil’s ranch, including the staff-office outbuilding where I sometimes spend the night. Finally, in the early morning of July 31, that natural dam gave way. A 20-foot-tall surge roared down and overflowed two normally dry creek beds on either side of the property.

Dr. Weil was away. My father and his fiancé slept in their recreational vehicle on one riverbed’s high side. They had driven from Washington, D.C., to Tucson to pick me up for the last leg of their trip to take my brother to back to Berkeley, California, with a stop planned to get married on the way.

Now fully awake and amazed by the inundated landscape, Justin and I decided to check on my father and see if we could cross the raging stream. My father shone his flashlight at us, a sign that he and his fiance were okay, but we couldn’t hear him over the roaring current, and there was no way we could cross it.

After the massive surge of water subsided a bit, my brother and I checked out the ranch. The only light came from the moon. A foot of water gently rippled over the driveway; the current was still strong enough to unsteady our footing. We cautiously waded into Dr. Weil’s office, an old, converted stone stable where he sits and writes every day. It was still standing, but most of the contents had bottle-necked in a mountain of mud at the door. The small guest house next door was in even worse shape, with one exterior wall entirely gone.

At about 4:30 a.m., we picked our way to his house, a rambling adobe structure with foot-thick walls, built in 1929. Though there wasn’t nearly as much water as in the outbuildings, it had seeped in beneath all the doors. We pushed Persian rugs in front of rooms to stop the flow of water. My brother began to mop. The humid air was dank and it was dark in the house, but we were happy to discover we could turn on the lights.

I spoke with Dr. Weil by phone at about 6:30 that morning. He was calm and curious about the situation. I didn’t have the heart to explain in detail much of the destruction.

By eight, the sun usually heats things up pretty well in the summer. But with the clouds and moisture, I was feeling rather chilly, still being in my underwear and a t-shirt – all of our clothes were packed in the RV on the other side of the wash. My brother said it was warm, that I had lived in the desert too long. The humidity felt strange to me.

We decided to it would be prudent to establish our resources. We knew the electricity and phone worked. The Internet connection worked. But of course, the swell of water had disrupted the well and water to the house. We drained the water purifier to capture a couple of gallons of clean water. It looked like we had enough for a day.

But with the mountains on one side and the river on the other, Justin and I were trapped, with no way to the access road that led off the property.

My dogs followed us as we hiked alongside the raging river. Nowhere along its banks did it seem safe to cross. Now, there were several people gathered on the other side – Dr. Weil’s household manager Dena, my father and some others. They waved, but it was hard to hear above the roaring current. We all stood there waiting for something – a convenient solution, I suppose – but when it failed to materialize, Justin and I shrugged and went back to the house.

I emailed people in town. Everything in Tucson was normal. This was clearly a localized disaster.

We spent that first day cleaning and mopping. It wasn’t raining any longer so we knew we just had to wait until the river went down. We slept in our sleeping bags in the dank office. By noon the next day, aided by a guide cable, we crossed the river. Then we went back. By evening, all of us were all able to walk through the foot of water running over the bridge. From above, it looked like a bulldozer had plowed through the property.

The mud and silt in the staff office had crested at over two feet high. We wandered to the gardens. Our newly built tropical house and the fifty or so potted trees in it washed entirely away. Most of the trees had been well-established, mature specimens that required two or three people to move. They vanished almost without a trace, though a handful were found in silt piles downriver and eventually replanted.

Most of the prized landscaping, including gardens, trees, cacti, hundreds of bushes and flowering plants, and greenhouses, fences and walls were swept away or destroyed, not to mention miscellaneous cars, trucks and outbuildings. Perhaps most dramatic, a graceful, expensive, nearly new steel and concrete bridge arching over the streambed was pushed off its piers and mangled into scrap metal by the surge.

Yet there were small grace notes. Incredibly, the “mother garden” full of organic vegetable plants where I do much of my work somehow survived completely intact. The water actually wrapped around it, and scoured out a massive pit as it traveled across the orchard towards the house (with the water still a foot deep on the property, I actually fell into the pit).

When Dr. Weil returned from his travels six weeks later, he, Dena and I toured the grounds. We went into the guest house. The flood had taken out a wall and washed the house’s contents into incongruous places: there was a couch in the pomegranate tree, Dr. Weil’s precious record collection in the bushes, and books were buried in the mud. Dr. Weil went to a closet and said something about a waterlogged box full of his papers from elementary school that his teachers had written on.

You could feel the grief.

Part Two: The Clean-Up, and Advice from Dr. Weil