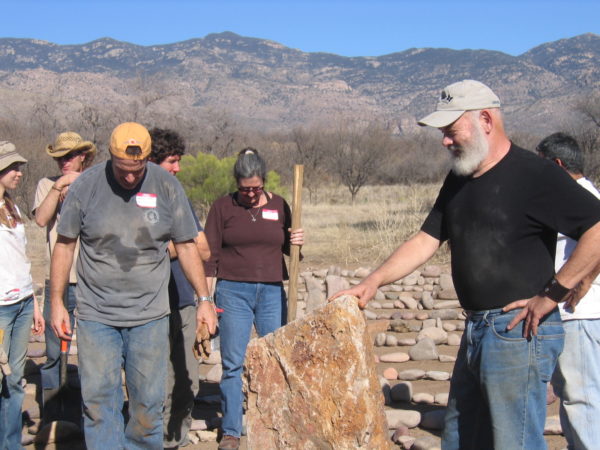 “It was beautiful,” said Dr. Weil, staring across the barren landscape. “It drew people here. I must say, I’ve missed it.”

The object of the doctor’s wistful reminiscence was his original labyrinth, a 60-foot-wide assemblage of concentric stone circles he helped to build three years ago. Based on the famed labyrinth laid into the floor of Chartres Cathedral near Paris, France around 1200 A.D., it stretched across a patch of sandy ground about 100 yards from Dr. Weil’s home near Tucson, Arizona.

Two friends, Jace Mortensen and Tamarack Little, had worked with Dr. Weil for three months (during the hours they could spare from their busy schedules) to wheelbarrow rocks from the nearby riverbed and place them to form the evocative shape. The effort had paid off – immediately upon completion in April of 2005, the original labyrinth was a hit. The daily parade of visitors to the ranch – assorted friends, medical professors and students, book publishers, even jaded journalists – could not resist the pull of a 20-minute contemplative walk through the structure. “It had an energy to it that was just very nice,” said Dr. Weil.

But a once-in-a-century flood on June 31, 2006, scoured away more than 2/3 of the stones, and scarred and pitted the earth beneath. “The water was about three feet deep through here,” recalled Jace (he and his brother Justin were the only two people at the ranch on that harrowing night). “And the current was incredibly swift, it just grabbed the rocks – I’m sure some are miles downstream.”

The post-deluge cleanup focused on getting the house, offices, bridges and other homestead essentials rebuilt and operational. Finally, after eight months, the ranch was largely back in order.

It was time to resurrect the labyrinth.

Reluctant to spend another grueling three months on the project, Jace had another idea: a labyrinth rebuilding party. Emails and phone calls promising a good time and free food promptly radiated across southern Arizona. On the morning of February 22, 2007, 28 volunteers, including faculty and students from the Arizona Center for Integrative Medicine, Weil Lifestyle staffers, ranch hands, assorted friends, children and five dogs gathered in the brilliant desert sun.

“If there is a pretty face on a stone, put that face up,” said Jace.

“Stay hydrated! Have fun!” commanded Dr. Weil, and the build was on.

Jace had prepared for the day by trucking in 12 tons of rock, since the tedious process of wheelbarrowing local rock to the site had been the main time drag during construction of the original . He had also pounded a center stake into the ground, tied a rope to it, and drew marks on the rope at two-foot intervals. As the volunteers moved the taut rope around the center pole like a clock’s minute hand, the marks showed where to place the stone courses.

Punctuated by laughter, barks, squealing kids and some serious discussions of stone positioning (doctors, it seems, are reluctant to place any object casually) the work went surprisingly quickly. By lunch, consisting of extraordinary Bolivian empanadas prepared by household manager Dena Jaffee, it was nearly half done. 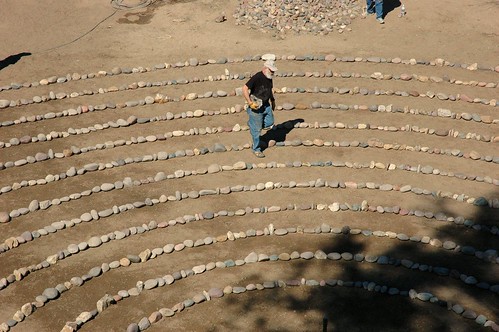 View the entire slideshow of the labyrinth rebuild.

That afternoon, the most challenging aspect proved to be erecting the monumental center stone, a five-foot-long, half-ton monolith that the raging current had pushed on its side. “It has to be exactly in the center,” decreed Dr. Weil. Some 45 minutes of vigorous anaerobic persuasion by Dr. Weil and others finally accomplished the feat.

By 4 p.m., the last stone was in place. Adults began walking the path. Children ran. Dogs slept, and were carefully stepped over. “I’m amazed,” said Jace. “It’s inspiring to see what a lot of people working together can do.”

“I am just really happy,” added Dr. Weil. “Now it feels like the ranch is back where it needs to be.” Today, the resurrected labyrinth is a focal point of Dr. Weil’s ranch. Visitors, often accompanied by Dr. Weil, walk it nearly every day.