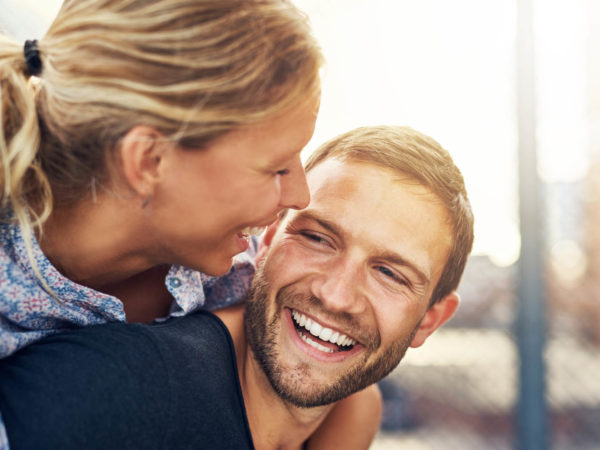 You raise an interesting question. According to recent studies, people who always seem happy or satisfied with their lives may be missing out on some of the benefits of dissatisfaction. June Gruber, Ph.D, an assistant professor of psychology at Yale, cautions that we have to be as careful to experience positive moods in moderation as we should be about consuming too much food. And in a review article published in the May 2011 issue of Perspectives on Psychological Science, Dr. Gruber and her co-authors noted a study that followed children from the 1920s into old age. They found that those who died younger had been rated by their teachers as highly cheerful.

The researchers also found that people who are always happy may not think as creatively as those whose emotions vary. They also tend to take more risks, just as patients with bipolar disorder do when they’re in the manic phase. The risks can include drinking alcohol to excess, using illicit drugs, driving too fast, neglecting or discounting threats or wastefully spending their earnings and savings.

In addition, research from a team at the University of Illinois suggests that being too happy may have an adverse effect on career prospects. An analysis of several studies that included data on more than 16,000 people worldwide found that student-age individuals who rated their satisfaction with life as a five out of five were more likely to drop out of school and had lower incomes than those who weren’t so happy and satisfied relatively early in life. One of the studies looked at a group of college freshmen in the U.S., some of whom rated themselves as very cheerful in 1976. Researchers followed up years later when the participants were in their late 30s, and found that on average, those in the cheerful group earned about $3,500 less per year than the freshmen who were not so happy in 1976. Edward Diener, Ph.D., lead author of that study, has suggested that people who don’t feel much anxiety or sadness are less likely to become dissatisfied with their jobs and therefore don’t feel much pressure to move up.

While happiness may have a financial downside, it also has a very important health-related upside. Research from Harvard published online in April 2012 in Psychological Bulletin found that being upbeat and optimistic may protect against heart disease. After reviewing more than 200 studies, the investigators reported that the most optimistic people had half the risk of a first heart attack than the least optimistic individuals. Overall, the study showed that people with a better sense of well-being tend to have lower blood pressure, healthy cholesterol levels and normal weight, and were more likely to exercise, eat well and get enough sleep.

In one of the earlier studies, published in 2001, researchers at the Harvard School of Public Health followed 1,306 men for 10 years, and found that the optimistic men accounted for less than the cases of heart disease among the study population. You can’t engineer happiness or optimism, but you can strive for a healthy emotional balance. In my book Spontaneous Happiness published in 2011, I discussed the American cultural insistence on being – or, at least, acting – happy all the time and introduced a Swedish word and concept that describe a more realistic goal. The Swedish term lagom doesn’t have an equivalent English term but means something like “just right” or “exactly enough.” I think that contentment, serenity, comfort, balance and resilience together constitute a lagom version of positive emotionality that can be cultivated until it becomes our default emotional state.